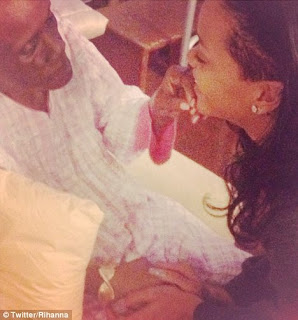 Rihanna’s grandmother has died after losing her battle with cancer. The devastated R&B star, who delayed a recent trip to Europe to spend time with her family and visit sick Clara ‘Dolly’ Braithwaite in hospital in New York, appears to have addressed breaking reports from Barbados, which suggest her grandmother has died, via Twitter.com.

As fans turned on the ‘You Da One’ singer following a shambolic performance at a Swedish music festival on Saturday (30Jun12), Rihanna had her late grandma on her mind, tweeting, “Goodbye grangranDolly get your beauty rest until I see you…” and then adding minutes later, “grangranDolly that is all.”

And her ex-boyfriend Chris Brown‘s manager/mum Joyce Hawkins felt the singer’s pain, offering her words of condolence after hearing the awful news.
Hawkins tweeted, “Angel May God Be With You And Your Family In Your Time Of
Sorrow. Love You Angel.” The note prompted Rihanna to reply, “mombreezy thank you! Love u mama.”

She paid tribute to her father on Twitter before heading off to see her grandmother in hospital so it was certainly a family-focussed day for Rihanna.
The Talk That Talk singer was seen heading to visit her relative Clara ‘Dolly’ Brathwaite in New York.  Rihanna has been making regular visits to her grandmother since the elderly lady was diagnosed with cancer.

The singer spent Father’s Day (17  June 12) in hospital visiting her sick grandmother, posting playful photos of herself with Braithwaite on Twitter.com and writing, “My heart smiled and cried all at once.”

Wizkid @wizkidayo In The Studio With American ...