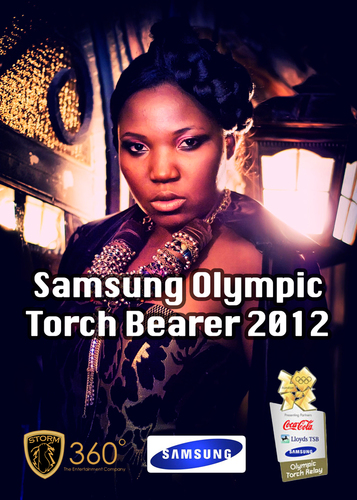 As the London Olympic games 2012 draws closer Storm 360 is happy to announce the naming of Sasha P as an Olympic Torch bearer, The young lady will make history once again on July 1, 2012 the 44th day of the 80 day ongoing Olympic relay ,when she will carry the torch in Birmingham UK for the stipulated 300 meters .
This is another feather in the well-decorated hat of Africa’s foremost female Hip Hop artiste, a feat that we are indeed very proud of. The Samsung mobile ambassador was chosen through an extensive selection process by the LOCOGmoment to shine public nominations which began in 2011, the process provided 2,012 torch bearers of the total 8,ooo from all over the world and apart from athletes and celebrities the selected few were chosen for their impact and contribution to the society and personal achievements.
As one of nine Nigerian representatives which include Kanu Nwankwo (ex-Nigerian International footballer), Banky W (musician), FunkeAkindeleOloyede (actress) and Steve ‘Yaw’ Onu (On Air Personality) Sasha enthuses “ I am so excited to be a part of this history, when I was

notified that I had been selected in March I couldn’t stop smiling but I wasn’t allowed to share the information yet, it is a great honor and an opportunity I will not take for granted, God is truly amazing!”

” Sasha continues to make us proud, she is an inspiration to millions of young ladies all over Nigeria and the continent and a shining example that when you are a good person good things keep happening shine on Sasha”  Obi Asika, CEO Storm 360
The Olympic torch relay which begun on May 19, 2012 where the first torch was lit by British Football Player David Beckham will end on July 27, 2012 marking the beginning of the Summer Olympics UK 2012.
http://feeds.feedburner.com/OloriSupergal