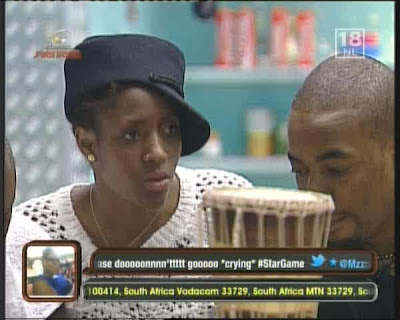 We all know what Zainab on Monday was wrong but slapping a woman three times says a lot about the kind of person DKB is.

He slapped Zainab three times and Biggie called the both of them and they were disqualified on Monday.

This is what women activists in Ghana have to say in this matter:

DKB was disqualified on the basis of what organisers of the 91-day reality show, MNet and Edemol, described as violence that contravened the rules of the game.

His action has received worldwide condemnation from many who saw it as demeaning, unethical and affront to the fight against violence against women.

Nana Darkoa Sekyiamah, Communications Officer at the African Women's Development Fund (AWDF) and a women's rights activist speaking in an interview with Myjoyonline.com was very blunt in condemning the action by the Ghanaian comedian.

“I don't watch Big Brother Africa (BBA) but I've heard all about the incident, and I have an opinion. You don't need to watch BBA to know Violence Against Women is abhorrent,” she said.
She noted that “Personally my take on the incident is that DKB's slap of Zainab is making public an incident which is often hidden in the private domain and that is, [the] violence that women face. Violence against women is pervasive in our society, and this time everyone should take a firm stance against acts of violence.”

She said it was unfortunate that “We have women dying every day because they are in violent relationships. We have women being raped; we have wars on the continent being fought on the bodies of women,” stressing that “Enough is enough. End violence against women.”

The AWDF Communications Officer, however, does not believe that DKB, who was in the Upville house of the reality show, should be sued for the action quizzing “What would be the point of suing him? And who will be suing him? I don't get the point of suing him. Maybe a lawyer would need to give me a perspective on that. Unless it's the victim suing him for assault…”

She instead, recommended that, the “first action against him should be really public contempt. He needs to realise that Ghanaians do not support his acts of violence. Family and friends should talk to him, and give him feedback on how abhorrent his actions were.”

A national apology, Nana Darkoa indicated will not be too much to ask for, “but it must be heartfelt, and the truth. He has to go through a process of personal transformation and recognise his actions were wrong.”

Touching on the argument that Zainab caused the Ghanaian to react in that manner, the women's rights activist stressed that “provocation is no excuse to be violent.”