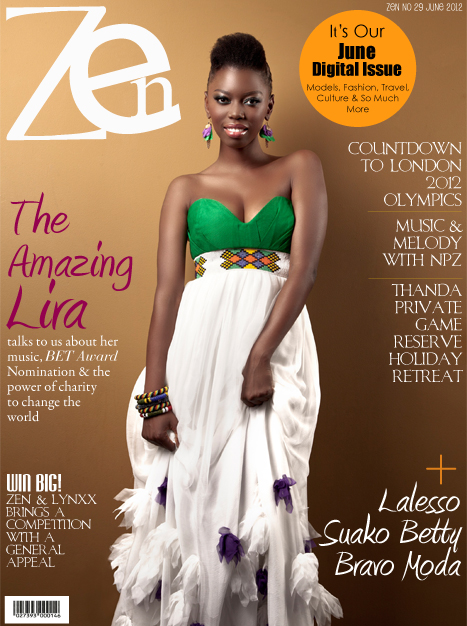 She is a Multi-Platinum Award Winning South African Superstar, a strong believer and supporter in the fight against poverty in Africa and is one of the most beautiful African singers of our generation; LIRA is undoubtedly one of the most popular African artists on the global scene.

Her style of music has made her one of the highest selling acts out of South Africa today and one of the most recognized African artists internationally. LIRA is following in the footsteps of the legendary Miriam Makeba and Letta Mbulu and has released four platinum albums and triple platinum Live in Concert DVD making her the highest selling artist in South Africa today. With a star studded list of historical performances from the FIFA World Cup Kick-Off
Concert when she joined Alicia Keys, Black Eyed Peas, Shakira, K’Naan and John Legend to perform a rousing rendition of Miriam Makeba’s crossover classic “Pata Pata” to her performance to celebrate one of African’s living legends; former South African President Nelson Mandela’s 92nd birthday celebration telecast are two of the most emotional performances of her career.

LIRA gives Zen an inside exclusive into her music, how she felt when she heard about her BET nomination and the power of charity to change the world. We have a host of fabulous fashion editorials this month from Lalesso, Suakoko Betty and BravoModa.

Photographer – Jurie Potgieter
Make Up – Vuyo Varoyi
Dress by Stoned Cherrie
Buy Lira’s album and music on itunes today by visiting this link -> http://itunes.apple.com/us/album/rise-again/id453302685?i=453302695&ign-mpt=uo%3D4
Log on to her website to read more about this awesome Diva -> http://www.misslira.com
http://feeds.feedburner.com/OloriSupergal
Share
Tweet
+1