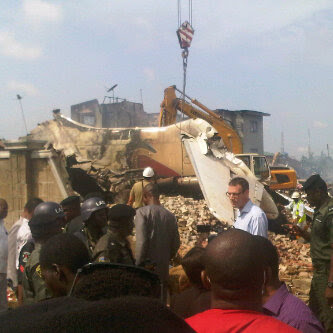 So far, 73 bodies have been recovered by rescue workers from the wreckage of Dana Air flight 0992 that crashed in Iju Ishaga, Lagos on Sunday June 3rd. The tail of the aircraft was also lifted from the ground this morning at 10.32a.m.

Two cranes arrived early this morning to clear debris and allow rescue workers better access to the densely populated area near the airport where the MD83 plane crashed on Sunday, with the 153 people on board confirmed dead.

President Goodluck Jonathan is expected to arrive at the scene of the crash site today at Iju Ishaga.