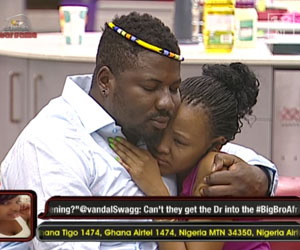 Saying goodbye is the hardest thing to do. Who said big boys don’t cry? Nigeria’s Ola and Chris are out of the running for the USD 300 000 prize!

In their Diary Session today, Ola and Chris sat with heavy hearts, prompting Big Brother to ask them what was on their minds.
This statement rang true this afternoon when the heartbroken Housemates said their final goodbyes to their fellow Downvillers, Ola and Chris. The two have exited Big Brother StarGame, following Ola’s battle with dangerously high blood pressure. 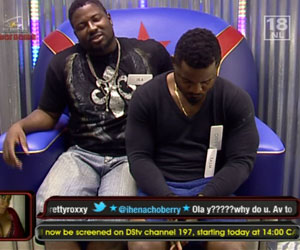 After unleashing the Voluntary Exit bombshell in the Diary Room, Ola and Chris broke the news to their
fellow Housemates. At first, no one seemed to believe that Ola and Chris are headed home.

Yadel was the first to ask “Are you going to bathe in champagne in Upville?” leaving the gang in stitches. When it became clear that Chris and Ola were not joking, a sombre mood immediately permeated the air. Tears flowed freely as the news sunk in.

Junia, in particular, was inconsolable. She and Ola are particularly close and were called Downville’s ‘fake married couple‘.