Close friends, fans and label boss of EME’s emerging talent Skales gathered at The Place Bar, GRA on Wednesday May 2, 2012 for an exclusive gig put together by The Place Bar in honour of the critically acclaimed rapper.

Skales who is presently working on the EME compilation album alongside Banky W and Wizkid says ‘It was another opportunity to mix and mingle with my friends again; and I am humbled by the gesture from The Place.’

The all night gig according to the managers at The Place Bar was done in honour of Skales’ extraordinary talent and his remarkable effort at doing what many would have thought impossible.

“Skales is a talented artiste, and we admire the fact that he has been able to combine singing, schooling and rapping well” Manager of The place Bar Deji Hudenyin says

ABOUT SKALES
Real name Raoul John Njeng-Njeng, the journey for Skales began in 2000 when he started writing his own songs and developing his rap skills in Kaduna, where he grew up.  In 2008, he entered for the Zain Tru Search competition and emerged as the winner for the North Central region, and then he came to Lagos. He has since then continued to wet the fans appetite with back to back hits.

Popularly referred to as “EME solider”, Skales is presently signed to Empire Mates Entertainment – Home to R&B power house Banky W and Pop Superstar WizKid. His new singles Mukulu and Keresimesi is presently enjoying airplay on radio in Nigeria with Mukulu being the fans favorite

In the midst of churning out back to back hits and preparing for the EME world tour of Europe and the United States, Skales is also working on the release of his official album. Those present at the exclusive gig were privileged to have a first listen to his next single “Komole”

“We had so much fun” Skales says 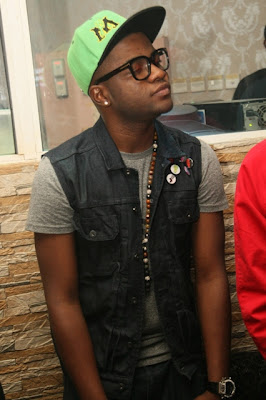