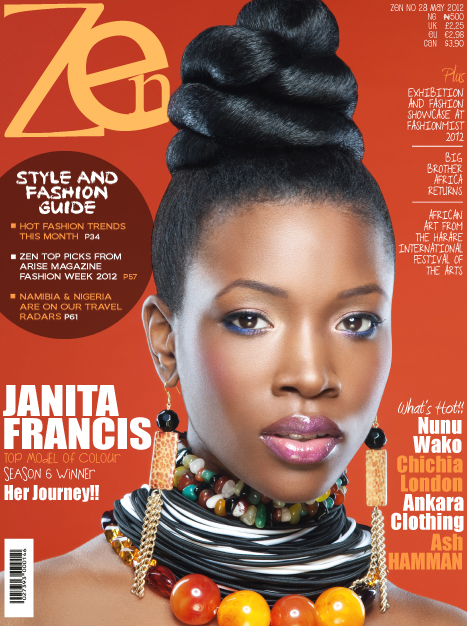 Editorial Note:– On our magazine cover this May, we have a woman filled with so much passion, devotion and purpose. She is a serious, and soul stirring model, a lady with so much stamina, strength and an amazing personality. Janita Francis is a British Caribbean model who has had her own share of disappointments & breakthroughs. Janita is the present Top Model of Colour winner ‘A competition open to any model that is of African, Caribbean, Hispanic, Asian & Oriental Heritage’, even though Janita lost out in the competition in 2010, that didn’t stop her from enrolling for the 2011 edition and this time; her determination, positive mindset & belief took her all the way to be crowned

TMC 2011 winner.  Janita is involved in the Kids Company charity which works with young kids, teenagers and young adults who have not had the support of their parents. Janita is striving hard to become a recognized international beauty & commercial model; just like Arlenis Sosa ‘ Janita says – Arlenis inspires me as she is so beautiful, humble and successful’. With such beauty, determination and intelligence, we see Janita not only becoming one of the world’s top models but also a perfect role model for aspiring models. We also have fantastic editorials from Talk show host Nunu Wako, Christine Mhando of ChiChia London, Ankara Clothing unveils their new Indulge Collection & our our up close & personal interview with RnB Singer Ash Hamman. It’s a packed May Folks!!!!