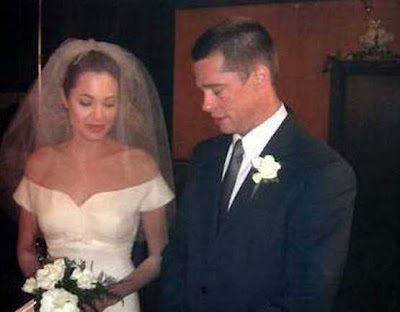 Angelina, whose ring finger has remained naked for several years, was recently spotted wearing an enormous sparkler – and the jewelry designer, who collaborated with Pitt on the diamond bauble, has confirmed that it is in fact, an engagement ring.

“I can confirm that, yes, Robert Procop did indeed design an engagement ring for Angelina Jolie, designed in collaboration with Brad Pitt,” a representative for the jeweler, who collaborated with the actress on her Style of Jolie collection, confirmed to The Hollywood Reporter.

And apparently, the design of the ring was years in the making.

“Brad had a specific vision for this ring, which he realized over a yearlong collaboration. He wanted every aspect of it to be perfect, so I was able to locate a diamond of the finest quality and cut it to an exact custom size and shape to suit Angelina's hand. Brad was always heavily involved, overseeing every aspect of the creative design evolution,” Procop says. “The side diamonds are specially cut to encircle her finger. Each diamond is of the highest gem quality.”

After years of maintaining that they would not wed until the opportunity was open to everyone, namely gay people, the actor recently revealed that they would probably cave in due to the requests of their six children.

Angelina collaborated with Procop, who also designed her jewelry for The Tourist, on a diamond pendent for Pitt in February 2011.