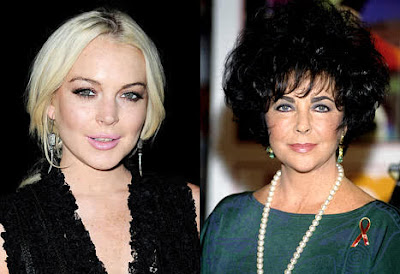 It's claimed that Lindsay Lohan landed the titular role in the Lifetime Elizabeth Taylor television biopic, Liz and Dick, for which she's been chilling, hard, in her mind, by wearing a tee with Taylor's face and posing with a book about Taylor's love life.

It's quite possibly a planted piece to make Lohan sound like the front-runner, following assertions by the executive producer that Lohan was simply one of many under consideration. But, according to the report, Lohan HAS landed the role with the caveat that she stay out of legal trouble lest she devolve and lose the role and the faith of producers as she did during Inferno pre-production in 2010.