Get Ready for the Official Launch of the B.A.N.S Clothing Line and the Announcement of the Zombie Competition Winners 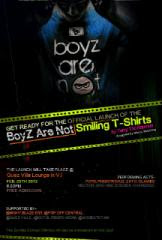 Come and witness the official launch of the most popular Nigerian made and owned T-Shirt line; the

Boyz Are Not Smiling T-Shirt created by Terry Tha Rapman and designed by Marco Martinez on Saturday, February 25, 2012.

The venue of the launch is at Quezville at Eko Gym and Spa Complex. 9B, Akarigbere Close Off Idejo Street Off Adeola Odeku Street, V.I. The time is 8pm and admission is free.

Performing artistes at the event include; Pope, Pherowshuz, Fecko, Vector, Gino, Sossick, Overdose, Olamide and others.

Also the winners of the Zombie Rap contest will be announced on the same day!

BANS T-SHIRTS WILL BE AVAILABLE FOR SALE ON THAT DAY!!!!

Nothing but love! Nigerian Idol joins the ...