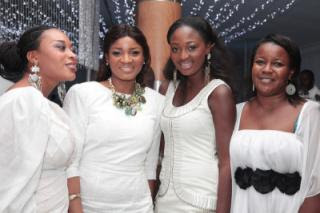 th anniversary with their annual revelry of thanksgiving- The White Gig!

The Lagos- based publication says they are leaving no stones unturned in celebrating 15 years of absolute excellence
“
We know that absolutely nothing guarantees success than standing firm and strong, we are aware that being lucky, preserving and long suffering, being smart and hard working count for a lot. But grace, the grace of God and your karma come into play when it concerns endeavors” Kunle Bakare publisher of Encomium says.
So on Sunday March 18, 2012 at The Haven in Ikeja GRA, Lagos, the annual White Gig will not only play host to achievers from all walks of life, but also kick off  a series of events marking 15 years of excitement, adventure, achievements, hard work and God's grace.
Apart from the White gig, Bakare says other gigs on the card include The Green and White Groove, The Black and White Ball and an end of the year party. We're told a special publication to commemorate the anniversary is also in the works.
Since its debut in 2007 The White Gig has become one of the most anticipated events in Nigeria's social calendar. With celebrities and friends clad in gorgeous all white ensembles, the atmosphere is blindingly different, and of course there is enough to eat and drink “
We can't wait to pamper our guests” Bakare says.
Encomium's White gig has hosted many stars over the years, including Omotola Jalade-Ekeinde, Funke Akindele, Genevieve Nnaji, Omowunmi Akinnifesi, Julius Agwu, T.W.O, Princess, Sunny Neji, Dayo Adeneye and Keke Ogungbe

“Take the steps, walk the Talk”, the 6-hour event will kick off with an elaborate red carpet reception. The iconic DJ Jimmy JATT will guide guests through soft, smooth and at times wild music; and guests will have an opportunity to dance and prance from 4PM to 10PM.

In its fifth year, the White Gig started when Encomium marked her 10
th Anniversary in 2007.
This year's event is supported by Kiss Events, Jatt INC, Couture Cakes, BlackHouse Media, and Replica Digital. It will take place at The Haven from 4PM to 6PM on Sunday March 18, 2012.

Founded in May 1997, Encomium Weekly has gradually but steadily risen to become the celebrity journal to beat and copy. The magazine captures the triumphs and travails of celebrities, from all walks of life – from music to movies, politics to big business, and those who dominate the social circuit. It has developed from being a purely black and white magazine with only color covers to one parading many pages of color.; and the most respected magazine in its category