David Choe set to become a multi-millionaire when Facebook begins trading as a Public Company. 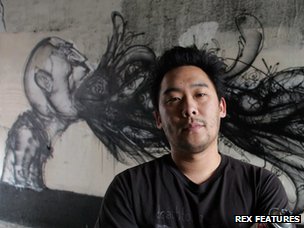 Interesting story…
A US graffiti artist who painted Facebook’s offices is set to become a multi-millionaire when the social network begins trading as a public company.

David Choe, who first spray-painted the walls of Facebook HQ in 2005, accepted shares in payment for his work. Now the site is planning to float on the stock market, its thought his share could be worth around $200m (£126m). He said he is the  “highest paid decorator alive”.

Although he had initially thought the idea of the social network was “ridiculous and pointless”, the artist decided to take the stock option instead of cash “in the thousands of dollars” according to the New York
Times. Choe’s payout could be worth more money than auction house Sotheby’s attracted for its record-breaking $200.7m (£127m) sale in 2008 for a collection of work by Damien Hirst.

However art from the original headquarters was cut out from the walls and is on display at other Facebook offices around the world. Choe – whose work can now be seen in galleries all over the world – is currently painting the site’s new offices in Menlo Park, California.

The artist, who began spray-painting in his teens, created the cover art for Jay-Z and Linkin Park’s multi-platinum album Collision Course in 2004. In 2008, he also painted a portrait of the then-Senator Barack Obama – a picture that now hangs in the White House.