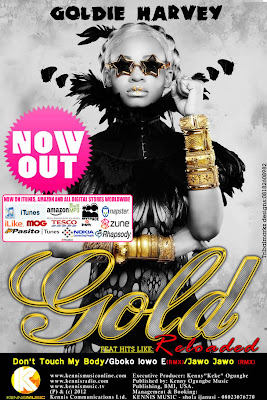 Sometime in 2008, I saw a music video on TV titled “Shift”. It featured a plump lady with rambling singing pattern, trying so hard to be sexy. That was the first time I set my eyes on her and obviously I was not impressed just like many music lovers at that time. This lady happened to be Goldie.

Fast forward to 2010, a fresh, revamped, and light skinned Susan “Goldie” Harvey with tremendous weight
loss, came to full glare. She brought us chart topping hits such as “You know it” ft eLDee and “Jawo Jawo” ft Jaywon. Part of her upgrade was the affiliation with top record label Kennis Music which brought forth her Debut album “GOLD”.

Hits from the album were well accepted, but the album as a whole wasn’t top notch. So taking up the risk of dropping an album very early in the year, Goldie ushers us into the world of her second studio album titled “GOLD Reloaded” two years later.

Over the last two years, Goldie has become one of the biggest female pop stars in the country, notable for eccentricity. Unlike most celebrities who despise outright comparison with their peers, Goldie prides herself as Nigeria’s Lady gaga (in appearance). However, only a minute part of this semblance played out in the 16-track album.

When Goldie is not been a narcissist on tracks such as “Say My Name”, she’s either falling in and out of love on songs such as “Don’t Wanna leave you” or just over the place with tacky lyrics and song titles such as “Shoko loko Bang Oshe” & “Point & Kill”.

GOLD Reloaded had some imposing, bumpy & pacy beats; particularly on the creative electronic remix of established hits “Jawo Jawo”, “Gboko Lowo e” and the most outstanding track on the album “Don’t Touch My Body” produced by Sarz.

A slightly different and conscious Goldie was brought to fore on “Breathe Again” over a mild beat, albeit its progressive chords were similar to Rihanna’s ‘Unfaithful’. She gave an account of her determination to terminate a failing relationship. She repeated this story-telling pattern, though with a different story line on the track “Fine” produced by Sunny ‘MasterKraft‘ Nweke who handled a large percentage of the album.

For a celebrated diva, a sex appealing song wouldn’t be farfetched. Thus she tried her hands on “You Lose” over a soft beat. Memorable parts of the track were her provocative moans & groans, sure to catch anyone’s attention.

On the party themed “Hands Up” produced by Legendary beats, guest artiste Banky W relegated singing, and instead decided to rap, standing toe-to-toe with fellow guest rapper Magnito who failed to impress with cheesy lines such as “I’m hot like a broken fridge”.

Whatever excitement that may have been built all along was altered as soon as the Kas produced & featured “Point & Kill” came on. His monotonous auto tune input on display was drab as usual.

A Kennis Music produced album these days would seem incomplete without the contribution of its label head Kenny Ogungbe, hence the OJB produced “Who’s The Boss”. Though Baba Keke (as he’s fondly called) didn’t say much on the track, he succeeded in giving glory to God in Hausa over a crunk beat.

Goldie is not an amazing singer; neither is she a prolific songwriter. But in roughly 70 minutes, “Nigerian Lady Gaga” was able to craft a mixture of Pop/R&B music with catchy African sounds. She also succeeded in dishing out a variety album without the input of most label mates such as Capital F.E.M.I, Minjin, Essence, KSB, Eedris Abdulkareem and Joel, unlike most other record labels.