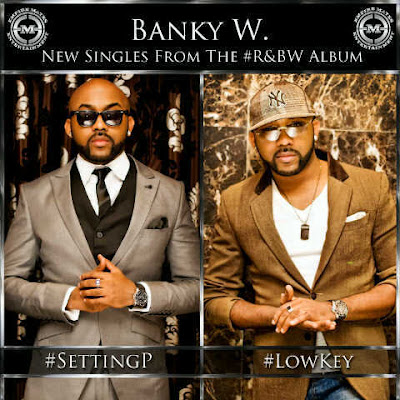 BANKY W is BACK with TWO brand NEW singles –  the infectious R&B slow jam #LowKey and the massive party jam #SettingP – to serve as the lead singles from the forthcoming #R&BW album!

The Sarz-produced #LowKey is a compelling R&B slow jam which not only gets you in that baby-making mood but also excellently showcases Banky W’s vocal dexterity and his songwriting prowess over captivating keyboard and violin arrangements and well-placed drum patterns.

Co-produced by MasterKraft and Banky W himself, #SettingP is a massive dance floor filler which is led by lush percussions and talking drums and grandiose synths which fuse beautifully with Banky W’s undeniable vocals that will most definitely get you dancing and going down low for all of four minutes.

Both songs also see Banky W showcase his versatility as he flexes his rapping skills on #SettingP and #LowKey. With these two songs, Banky W has officially returned as the King of African R&B and we CANNOT wait for the forthcoming #R&BW Album!