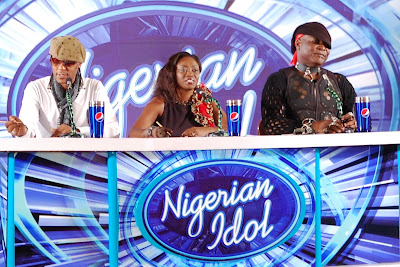 It was a mixed basket of emotions for viewers last weekend on Nigerian Idol as the hit show aired its second and third episodes. The two episodes which ran from Friday December 9 to Monday December 11 across television stations in the country showed the auditions that took place in the cities of Abuja and Enugu.
“And still, these loaded episodes are only a tip of the iceberg,” explained Producer Lilias Bode. “Nigerian Idol will bring to the fore all the drama, excitement and beautiful music it is known for. Dreams are being born here and it is our pleasure that viewers get to see the entire picture behind these immensely talented young people.”

Starting off in Abuja, viewers were first introduced to new Nigerian Idol judge Charly Boy who wasted no
time settling into the show. The episode which aired from Friday took viewers through some of the talent the Capital City had to offer, from the melodious to the ridiculous. At the end of the day, young talents were offered golden tickets to appear at The Dream Studios in Lagos.
Then it was Port Harcourt’s turn. In dramatic fashion, Charly Boy chose to arrive the venue on a motorbike while the other judges; Yinka Davies and Jeffrey Daniel flew down via official airline partner, Air Nigeria. Port Harcourt had its own fair share of hilarious moments: a professional barber took hair grooming to a new dimension; rapping ‘Gangster’s paradise’ while giving a mock haircut. Perhaps the most touching story from the episode was that of rape survivor, petite Sylivia Ita Bassey who was determined to help people in her own shoes by using her unique voice. Port Harcourt also brought Peace Akraka-Elom who has overcome her inferiority complex and stage fright through music.
As viewers recover from the exciting weekend package presented by Nigerian Idol, the next weekend also promises more drama and excitement as the audition train makes a stop at Enugu and Lagos in search of the next Nigerian Idol.

The Idol franchise is the world’s biggest and most popular platform responsible for the discovery of popular stars like Jennifer Hudson, Fantasia, Adam Lambert, Timi Dakolo and Nigeria’s own Yeka Onka. The show begun airing on December 4 and will run through the new year until April 1st when a new Idol is announced.
Nigerian Idol is proudly brought to you by Etisalat in association with Pepsi and Sony. It is supported by Air Nigeria, Kentucky Fried Chicken and Megalectrics (owners of Beat FM, Classic FM and Naija FM).