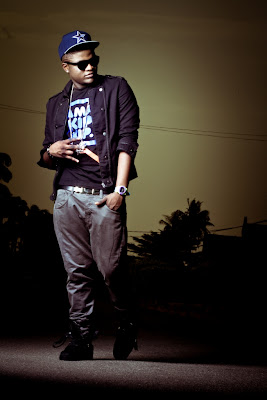 To serve as a precursor to his upcoming single and video releases and to whet the appetite of his loyal fans, E.M.E rising rap star Skales delivers to us this insanely huge freestyle titled “Misunderstood“. Covering the Fabolous and Rick Ross-featured 2010 smash hit “Swagger Right” from Def Jam-signed girl group Rich Girl, Skales shows us and all that will listen superbly just why he is a force to be reckoned with in African Hip- Hop.

Poignantly and cleverly addressing the complications and misunderstanding between himself and the “Michelle to his Obama”, Skales completely turns this spooky Rich Harrison-produced beat on its head and superbly
wraps his sharp and witty lyrics – with much finesse and dexterity – around the quavering synths and eerie finger claps that complete this slithering production to create a 3-minute showing of Skales lyrical
prowess. Our only logical question is if this is a ”freestyle”, what can we expect from his forthcoming singles?

Known as your favorite rapper’s favorite rapper, this witty and charismatic performer knows how to showcase his distinct style and flair and with hits like “Headed For A Grammy”, “Be Mine” and “Must Shine”, Skales has swiftly and confidently climbed up the ranks in African Hip-Hop circles, building up a loyal following along the way. Signed to Empire Mates Entertainment (E.M.E) – home to both Banky W and the star boy himself, Wizkid – Skales is  set to take on the world and bring a fresh new vibe to the rap game as we know it…

New Single: ADDICTION – What you want