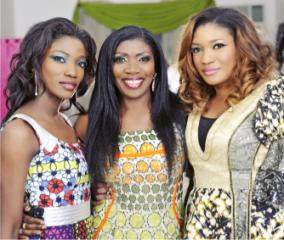 Fashion designer Folake Majin is set to unveil “The Royal collection” alongside “The Breathless Experience” Collection by Miss Majin and “The Circle Revolution Collection” by GM4FM’s Gogo Majin
The ‘strictly by invitation’ event will be showcased at the Civic Center on Sunday the 20th of November starting from 6pm.

In 1988, Folake Majin’s “Schon Arik” label stepped on to the then very young fashion industry in Nigeria with pieces that instantly caught on with women because they were created to be visually stunning and
distinctive while paying painstaking attention to detail. More than two decades later she remains a pioneer fashion designer and a leader in the fashion industry with an ever growing clientele. She
has also inspired and mentored several young designers who have come into their own success learning and gleaning from her vast industry experience.
The event which features Miss Majin and Gogo Majin, Folake Majin’s daughters will also feature performances from A-list artistes The Fashion show will have three segments, with three different
collections from the Folake Majin brand, Miss Majin brand and the GM4FM (Gogo Majin For Folake Majin) brand.

“The Breathless Experience Collection is a perfect combination, a combination of moving art and sound” Miss Majin says Folake Majin’s daughter, Gogo Majin, designer for GM4FM speaks about
her collection – “My inspiration for the collection came from an accessory that has been made and used by my mom for her clients for more than a decade on many of her haute couture designs. I took that accessory and built the whole collection around it”. The GM4FM is showing for the first time. The label was launched on the 13th of august 2011. She continues “.For Sunday please expect a different spin to a fashion
show. Expect original visually stunning clothes and breathe taking pieces. A show to remember”
For Folake Majin the end result to the creative process must be breathtakingly beautiful clothes using fabrics such as African print, Aso Oke, silks, Chantilly laces etc. Often referred to as “The designer to the First ladies” Folake Majin has built a strong and loyal clientele (including several first ladies
of Nigeria, television personalities, business women, senators, housewives and beauty queens) over the more than two decades since she started the label due to her creativity and drive
The show is headlined by Folake Majin and features Miss Majin and GM4FM. The event is powered by MTN and also sponsored by Bank of Industry, Beat & Classic FM and Channels TV.

From Enugu to Kaduna, Lagos to Asaba ...