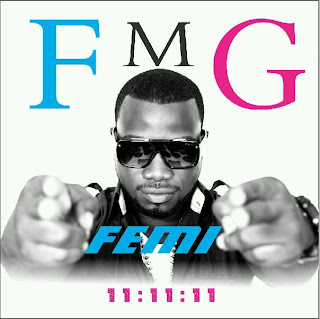 His official debut single titled ‘Penetrate’, was released on the 26th of September 2011. ‘Penetrate’ is a uptempo record bound to keep party people moving and rock a gathering or party of two and more, it is produced by Vkel.  FMG’s follow up single ‘Femi’ is a slow record, where the singer croons on a hat-driven record. ‘It is the song to love with, wake up to and share with a loved one’, ‘Femi’ confirms that the Peace Entertainment managed artiste, FMG is an amazing singer with some critics having talked about going to be a likely contender of Wande Coal’s spot if he doesn’t deliver on his anticipated comeback record.

FMG is a songwriter, performer and RnB/Hiphop recording artiste – born Nifemi Akinde into a family with 3 siblings and being the youngest. This singing maestro began singing in 1995, honing his craft for his passion until he made a move to make it a profession in 2005.  FMG, who is influenced by late Fela Kuti,
Sunny Ade, America’s Usher Raymond is fast growing into a must watch singer and performer.

The Ogun state but Lagos raised singer released a record entitled ‘Jamilaya’ in 2009 which rose him to prominence in the industry circuit, among peers and colleague. Born in the late 90s and realizing the need for a proficient management, on approached by John Ake of “Peace Entertainment” – management outfit, the talent got signed to the outfit and still being managed.

His stage name, FMG was cut from the acronym of his first name –Femi, FM while G stands for Great, what the singer intends to emerge as during the course of his career. The steady rising act has graced the stage and wowed crowds alongside superstatus artistes like P Square, 9ice, Omawumi, Late Da grin, Dr Sid and J Martins.