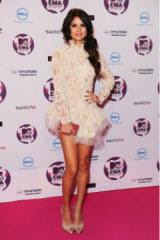 The ‘2011 MTV EMA’ is sponsored by Dell, Replay, Hyundai and Swatch.
Lady Gaga triumphed in the Best Female, Best Song and Best Video categories, as well as Biggest Fan – a brand new award that celebrates artists with the most committed fanbase.

Brit rockers Coldplay opened the awards with an electrifying, amped up performance of ‘Every Teardrop Is A Waterfall’, while Lady Gaga’s sublime vocals for ‘Marry The Night’, performed against a giant moon sculpture, brought the audience to fever pitch. Global pop phenomenon Justin Bieber got everyone dancing after ‘Under the Mistletoe’ built up to ‘Never Say Never’. DJ David Guetta set the Odyssey Arena alight with his spectacular dance medley featuring Ludacris, Taio Cruz and Jessie J, illuminated by a dazzling array of lasers and glitter balls.

MTV used every staging trick in the book to bring the 2011 MTV EMA to life, with lasers, LEDs, projections, smoke jets, outsize props, balloon releases, glitter cannons, dry ice, outrageous costumes and more harnessed skillfully to complement the artists’ performances. Among the many highlights were: UK artist Jessie J exploding out of a giant golden bank safe and an ethereal balloon release during Bruno Mars’ heartfelt rendition of ‘Marry You’. US Electro-hop stunners LMFAO got everyone in the house jumping ‘Party Rock Anthem’ made a huge impact, as the group and their dancers took to the floor for a virtuoso display of their trademark ‘shuffle’ dance, complete with dancing robot.

In a more reflective moment, Jessie J presented a moving salute to the late Amy Winehouse in the form of a touching video tribute from the singer’s devastated fans.

In a first for the MTV EMA, two outside broadcasts were built into the show, with local heroes Snow Patrol rocking more than 15,000 fans at a spectacular outdoor stage built directly in front of the historic City Hall while over at the historic Ulster Hall, 1200 very lucky Red Hot Chili Peppers fans were treated to a rare, intimate performance by the incredibly dynamic stadium rockers.

Rock legends Queen, who were handed the Global Icon award from Katy Perry closed the show with a triumphant flourish, lifting the roof with a stunning medley of hits from their extraordinary musical career. Queen veterans Brian May and Roger Taylor were joined by flamboyant US Idols star Adam Lambert on vocals for a musical voyage through their greatest hits including ‘The Show Must Go On’, ‘We Will Rock You’ and ‘We Are The Champions’.

EMA host Selena Gomez charmed the audience and showed her comedic flair in a high octane performance that saw her host the main show and the digital show simultaneously. Set piece skits and stunts added to the fun, as Gomez interacted with her own video alter ego on giant screens and mimicked Lady Gaga’s famously outrageous dress sense. The ‘Monte Carlo’ star also took time off from hosting duties to surprise her fans with a sparkling rendition of her hit track ‘Hit the Lights’, performed with her band, The Scene.

The ‘2011 MTV EMA’ airs to a potential viewing audience of more than 1.2 billion people via MTV’s global network of more than 60 channels reaching more than 640 million households around the world as well as through syndication. In addition, its convergent programming and content reaches the entire interactive community, via MTV’s nearly 200 digital media properties around the world. Richard Godfrey and Bruce Gillmer are Executive Producers for the ‘2011 MTV EMA.’