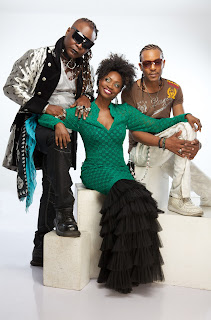 Bigger and better! Nigerian Idol launches Season II… announces Charles Oputa as new judge and Tiwa Savage as new host
After an electrifying first season that saw the crowning of the first ever Nigerian Idol, Yeka Onka, the global music phenomenon returns to Nigeria for a second season.
Season II of Nigerian Idol is produced by the Optima Media Group (OMG) and continues to enjoy the sponsorship of Etisalat, in association with Sony and Pepsi. This was revealed at a media & VIP launch on 28 September 2011 at the Oriental Hotel in Lagos.
The event also witnessed an electrifying performance of the hot new single ‘Follow U’ by Season 1 winner, Yeka Onka. The singer was produced by Chocolate City’s Jesse Jags.
“Nigerian Idol will be an even more exciting television experience this season,” its executive producer, Rotimi Pedro, said. “The last three shows of NI garnered more viewership,

especially with the youth demographic, than any other music reality show – proving the point of the power of the Idol brand across the globe. We are committed to ensuring that the standards from the past show – in terms of content, production and interactivity are surpassed this time around. This is Idol – it’s the real deal.”

The cycle of the show remains the same, spanning seven months, the producers have confirmed. The season kicks off with auditions in four Nigerian cities – Abuja, Port Hacourt, Enugu and Lagos, where auditions end in November.
“Based on audience feedback and to enhance the unique Idol experience this season, we’ve made a few major changes,” said Mr. Pedro. These exciting new changes include a new judge; musician, former music association president and TV host, Charles Oputa, fondly known as Charly Boy.
The judges’ line up however retains songstress Yinka Davies and international choreographer and musician, Jeffrey Daniels who has returned this season.
After hotly-contested auditions that featured the brightest across the media and entertainment sectors, new hosts have also been announced and they are rave-of-the-moment singer Tiwa Savage, and VeeJay Ill Rhymz.
“I am very excited to be a part of the successful Nigerian version of this global franchise,” Savage said. “I am lucky to have worked in the music industry in America, writing for acts like Jennifer Hudson and to have seen close up what the flagship American Idol has done for amazing talents like her. I am incredibly thrilled to be part of that magical experience in Nigeria and to be a witness to the creating of a new Nigerian superstar.”
There are only winners on Nigerian Idol this season as lead sponsor Etisalat will give premium prizers not just to the winner, but also to the runners-up and others from the Top Ten.
The winner of the show will get N2. 5 million, a Galaxy Tab, a Blackberry, an iPod and a car. The first runner up gets N1.5 million, a Galaxy Tab,Blackberry and iPod; and the 2nd runner up will receive N1million, a Galaxy Tab, a Blackberry and an iPod. Finalists from 4th to 10th place also receive each, N100, 000, a Galaxy Tab, a Blackberry and an iPod.
The show begins airing  December 4, until the winner is announced at a grand gala in April, 2012.
Nigerian Idol is brought to you by Etisalat, in association with Pepsi and Sony.  It is also supported by partners, Air Nigeria, SONY, Etisalat, Pepsi, Classic FM, Naija FM and Beat FM.