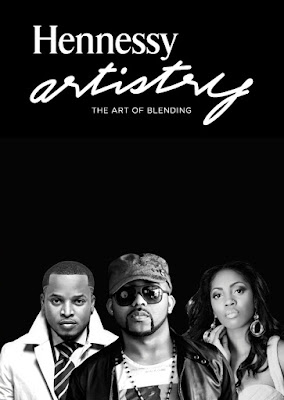 Lagos|Nigeria As part of events surrounding this year’s Hennessy Artistry, Hennessy Nigeria has announced a series of VIP Night club parties starting from September 30, 2011 with Tiwa Savage, eLDee and Banky W leading a pack of Nigerian artistes to major clubs in Nigeria!

Since Hennessy Artistry announced Headliners for this year’s project, it’s been all work and even more play for headliners Banky W, eLDee and Tiwa Savage!

Not long after the theme song for Hennessy Artistry 2011 titled “Toast to the good life” was released, Banky W, eLDee, Jesse Jagz and M.I embarked on a scheduled trip to Cognac, France alongside Hennessy Nigeria’s Communications and Events Manager Tokini Peterside, and Head of Trace Urban Anglophone, Sam Onyemelukwe.

While in France, the artistes were treated to a night in “Chateau de Bagnolet”- a private chateau in Cognac belonging to the Hennessy Family. Banky W, eLDee, Jesse Jagz and M.I joined the likes of Common, The Roots, Ray Charles and Alexander Burke on the list of prestigious guests
at the exclusive Hennessy chateau- An occurrence all four artistes playback as “an experience they will never forget”.

Now, starting from Friday, September 30, Tiwa Savage, Banky W and eLDee will headline four exclusive Hennessy Artistry VIP Nights in Lagos, Abuja and Port Harcourt. The first of which will hold at Octopus Lounge in Yaba on September 30.

The VIP event will showcase spectacular performances from the headliners as well as some of the country’s finest artistes; all backed by official DJ Caise.

As always, Hennessy’s innovative musical platform not only gives room for vast creativity, but also encourages “The Art of Blending”. This is why this year, one lucky Facebook fan will get to win a VIP Night-Out with the superstars at the VIP event, and hang out with them for the night. The process according to Tokini Peterside, Hennessy Communications and Events Manager is easy “Just visit the Hennessy Nigeria Facebook page at www.facebook.com/hennessynigeria to see how to apply”..

Since inception in 2006, Hennessy Artistry has been able to mix and blend hip and inspirational music from around the world. Artistes that have been involved with the music platform include Kanye West, Pharell Williams, Ne-Yo, Leona Lewis, LL Cool J and Fabulous. .