Inside Maltina Dance All 5 Academy: The Journey So Far

The ongoing Maltina Dance All (MDA) family reality TV show so far, has witnessed different twists, turns, fun and lot of excitement for the whole family since it hit television screens across the country on September 4. Since the MDA began five years ago, no edition has been able to match the thrills and frills so far experienced at this year’s edition. The ambivalence and uncertainty in the MDA Academy has added in no small measure to the drama and excitement presently unfolding in the academy as the families’ battle their way into millions.

After the eviction of the Anibogu and Chidi families from the Academy, life soon returned to normalcy at least for the time being. The Eight remaining families; Ekubo, Efe, Edoho, Owolabi, Utogo, Ngwu, Dare and Adekpe went back to their routine. Bimbo Obafunwa, Dance Director took them through the “Art of Choreography” class where the families were introduced to their next dance style, Pantomime, by pantomime instructor, Paolos Sisiano. He described Pantomime as “a dance that has to do with a lot of gesticulations, body movement and facial expression” 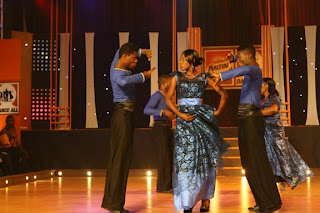 The Mothers of each family through a balloting process selected the theme and music they will be performing. The families started rehearsing immediately with their theme songs. Glory Ekubo, who was selected by the Judges as “dancer of the night” after the Salsa performance, had the privilege of selecting the order of performance for the Pantomime show. The first family on their list for the Pantomime performance was the Dare family followed by Adekpe, Ngwu, Ekubo, Edoho, Efe, Owolabi and the Utogo family.

After rehearsals, the families displayed their musical skills during the Karaoke night. A representative from each family selected a particular song of their choice and performed their song following the lyrics of the song displayed on a monitor. 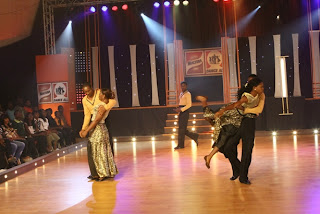 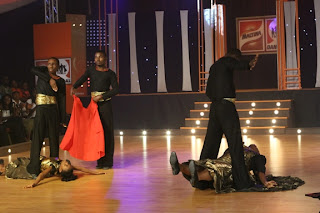 After days of constant rehearsals in the Pantomime dance, it was time for the families to display what they had learnt. At the Pantomime show, Muyiwa Oshinaike, one of the Judges, made it clear that the panel of Judges would be looking out for descriptive movement, body vocabulary, stage usage, creativity, “musicality” and team work of the families Pantomime performance.

The Dare family was the first to perform their “rehabilitation theme of an addict” followed by Adekpe family whose theme was an “expression of a dying Nation.” Ngwu family performed a “Professional Thief theme” which got them a standing ovation from the audience. The Ekubo family was next with the “brush strokes of life” theme. The “rhythm versus rhythm less” theme was performed by the Edoho family. Efe family performed a “workaholic” theme showcasing the gap between the rich and the poor. The Owolabi performed the “Cave Men” theme and finally the Utogo family performed the “Amebo” theme of a gossip constituting nuisance in her surrounding. At the end of the performances, the Judges selected Kanayo Ngwu as the “dancer of the night” for the Pantomime performance because of the very impressive choreography and composure he displayed.

At the end of the Pantomime performance, the Judges put up the Efe, Utogo and Edoho family for possible eviction. Citing their reasons Muyiwa said the Utogo family had the simplest theme but treated it badly.

The families resumed their daily exercise and were later introduced to the Paso-doble dance style, a Spanish international dance. The dance instructors Nnamdi Nweke popularly known as ‘Ice’, the artistic director of Society for performing Arts in Nigeria (SPAN) and Ukalina Opuwari, 2008 family representative of Maltina Dance All winning family, first female Nigerian to be certified in Latin/Ballroom by the IDSF/IDAT in Beirut, Lebanon and currently the head of dance in SPAN took the families through the dance style and the use of the Red cape by the Matador (Bull fighter) which is symbolic in the dance. 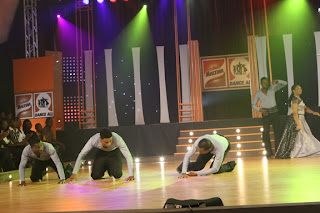 The families up for eviction were required to do a performance of both the Pantomime and Paso-doble dance styles. Speaking at the eviction show right before the performances, Muyiwa Oshinaike, said he would be on the lookout for facial expressions in the family dance routines, because that was one of the distinctive features of the Paso-doble and Pantomime dance styles.

The eviction showdown kicked off with the Pantomime performance dance by the Adekpe family followed by the Owolabi, Efe, Edoho, Utogo family. The second dance style of the night was the Paso doble, which debuted with the Efe family’s performance. It was followed by the performances of the Edoho, Utogo, Adekpe and wrapped up by the Owolabi family who gave a highly impressive dance interpretation of the Paso doble dance style much to the delight of the Judges and audience.

After much deliberation, the Judges confirmed the eviction of the Efe and Adekpe families as the curtains fall on the second eviction showdown. Citing a couple of reasons for this, Michael Adegoke said the performance of the Efe family, was out of line with what they presented. He added that the recommendations suggested to the families before the eviction showdown, was not adhered to and as result, they were evicted from the academy.