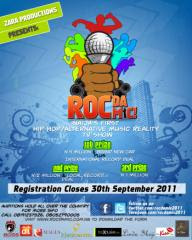 Over the years, Nigeria has become a force to reckon with in the hiphop genre of music, bothin within and out of Africa. Stars such as living legend 2face, D’banj, Femi Kuti, eLDee, Banky W, Wizkid, Sauce Kid, Naeto C, MI and others on the inexhaustible list have continued to export good contemporary Nigerian music.

In order to develop new-breed superstars who can competently create next-generation hiphop music, the RocDaMic reality show was born.

An idea of Abuja-based Zara Productions, the reality TV show hopes to sustain pop culture in the country and effectively act as a tool of youth empowerment and national development. It will be aired on both local and cable TV stations and will be watched by viewers all over the globe during the thirteen weeks
of suspense and talent display it entails.

To participate in the show, the four steps outlined below should be taken:

Direct link to the form: http://rocdamic.com.ng/rocdamic_2011_reg_form.pdf

3. Walk into any Oceanic Bank nationwide and pay the sum of 4000 Naira into:

4. Come with your teller and completely filled form to the venue of the auditions. Also bring a demo beat along or prepare to freestyle at the venue. No MIMING will be allowed.

For those who can’t download the Registration Form, forms will be made available at the auditions for those with just their teller. Prizes to be won include:

Second Prize: 2 Million Naira and a Local Recording Contract worth Millions of Naira

Young Nigerian Designer to watch out for ...