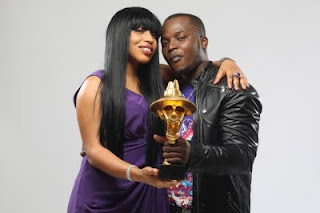 According to organizers, the urban music awards which are aimed at ‘rewarding musical excellence and outstanding creativity’ will hold at the New Expo Hall of Eko Hotel and Suites, Lagos on Saturday, October 22, 2011.
As announced earlier, veteran producer and rapper eLDee da Don, and talented actress Rita Dominic will be hosting the awards show which will showcase spectacular performances from the country’s finest artistes.
‘We took all this time to come up with concepts that will surpass the previous editions; we are glad to raise the standard again, far above what we have set over the years. This year, a lot of obvious changes will be seen, I can assure you of this’ Ayo Animashaun who founded the awards in 2006
says
This year, Fifty Eight (58) artistes will battle to win a desirable ‘Heady’ (made up of 21 carat gold) in one of twenty categories including ‘Next rated category’, ‘Album of the year’, ‘Artiste of the year’, ‘Song of the year’, ‘Recording of the year’ ,’Producer of the year’, ‘Best music video’, ‘Best RNB single’, Best Pop single’ and Best RNB/Pop album’
Other categories include ‘Best Rap Single’, ‘Best Rap album’, ‘Lyricist on the roll’, ‘Best Collabo’, Best Vocal Performance (Male), ‘Best Vocal performance (Female), ‘African Artiste of the year’, ‘Best street hop’, ‘Revelation of the year’, and ‘Best Conscious music’
Performers for this year are to be announced shortly.