Life Inside Maltina Dance All 5 Academy

The much anticipated, biggest ever Maltina Dance All 5, kicked off on a very high note on September 4 with 15 families selected from across the regions having to go through the MDA boot camp. The camp saw the 15 families go through intense and grueling exercise sessions over a period of time. They were also tutored in different dance styles by seasoned professional dance directors.

After the rigours of the booth camp, the 15 families went up against each other to vie for the 10 available slots in the Academy. The first performance and eviction show to determine the families that would make it to the famed MDA Academy was declared open by the gorgeous compeer, Kemi Adetiba.
The Ukadike family opened the show exhibiting their dancing skills, soon the Omukoyem family followed suit and so did the Edoho, Ekubo, Ojueromi, Owolabi, Efe, Dare, Anigbogu, Obi, Ngwu, Utogo, Anosike, Adekpe and Chidi families in that order.
The families entertained with their performances to the extent that the three Judges in the persons of Janell Burgess, Michael Adegoke and Muyiwa Oshinaike, found it a herculean task selecting the 10 families that would be admitted into the Academy. Eventually the 10 families that were selected are; the Ekubo, Efe, Edoho, Ngwu, Chidi, Anibogu, Utogo, Dare, Adekpe and Owolabi families. The 5 families who did not make it into the Academy were; the Ojueromi, Anosike, Omukoyem, Obi and Ukadike.

The 10 families that made it were immediately absorbed into the Academy and were subsequently introduced to the “Wazobia” dance style (contemporary Nigerian dance style).

After undergoing series of rigorous rehearsals, the 10 families went through a balloting process to choose themes and tracks for the “Wazobia” dance and were thus ready for their first performance in the Academy. The Anigbogu family was the first family to hit the stage with the “Hausa Farmers dance” followed by the Edoho, Ekubo, Chidi, Owolabi, Dare, Efe, Adekpe, Ngwu and Utogo families respectively in that order.
After their performances, the Judges put the three families of Chidi, Efe and Edoho up for possible eviction. Enoch Dare was selected as the best dancer of the night and as a result, his family, the Dare family got the privilege of choosing the order of performance for the next dance style which is the Salsa dance.
Back in the Academy, the families were introduced to Salsa dance style by Salsa dance instructors Lilian Yeri and Gbenga Yusuf. The families were taught the basics of the dance and family representatives got involved in selecting the tracks for their performance through a ballot process while the Dare family determined the order of the performances. Much to the dismay of the Dare family, Esther Dare, suddenly took ill and could no longer rehearse with her family in the Salsa dance. The Doctor in the academy, Dr. Charles Nwigwe advised Esther to avoid rehearsals and was subsequently transferred to a hospital.
The family representatives got together in the evening and battled it out in the “thug of war” game. The female contestants gave their male counterpart a good contest, but the male team won the game in the end.
Mothers were not left out as they also engaged in a Fashion parade. They hit the runway in colourful attires to the amazement of everyone. Fathers also had their own share of the fun as they came up with surprising ideas to entertain the families at the “Daddy’s talent show”.
With three families; Chidi, Efe and Edoho already up for possible eviction after the “Wazobia” performance, the tension in the academy was palpable. The families had rehearsed thoroughly for the Salsa competition and were ready to show the Judges the stuff they were made of. The stage was enlivened by the Utogo family followed by Ngwu, Adekpe, Chidi, Ekubo, Anibogu, Dare, Edoho and Owolabi families.
At the end of the Salsa performance show, Utogo and Anigbogu families were put up for possible eviction. According to Muyiwa, the Utogo family was put up for possible eviction because the concept of their piece did not have entertainment quality. He said the Anigbogu family was also picked for possible eviction due to poor usage of stage. He advised them to learn to connect with each other as a family and also to make good usage of the stage. The Utogo and Anibogu families joined the Chidi, Efe and Edoho families who were also up for eviction after the “Wazobia” dance performance. 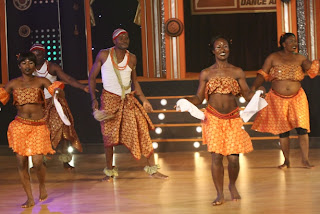 The dancer of the night was Glory Ekubo, “ salsa is a dance that comes from within and when Glory walked down the stage, she went straight to character and her attitude was great, that is what we need in this show and she gave it to us” stated Michael Adegoke, one of the MDA judges.
With the number of families up for eviction rising to 5, it therefore beckoned on them to try and perfect their routines and prove to the judges that they had what it takes to remain in the MDA Academy at the first eviction show performance. The eviction show involved the 5 families presenting the Wazobia and Salsa dance styles. The first dance category at the eviction show was the Wazobia dance and it was opened by an entertaining performance by the Utogo family and subsequently followed by the Efe, Chidi, Edoho and Anibogu families respectively.
At the end, after much deliberation, the judges unanimously decided that, the Anibogu and Chidi families fell short of demonstrating what it would take to progress further in the academy and were therefore evicted from the MDA Academy.
http://feeds.feedburner.com/OloriSupergal