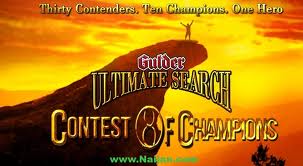 The 30 contestants will be revealed at an elaborate event which will take place by 6pm at the Eko Hotel and Suites, Victoria Island. More than 21,000 persons enlisted to partake in the contest. After rigourous and painstaking physical selection exercises which held in locations in Abuja, Benin, Owerri and Lagos, the thousands of applicants were pruned to 60.
The 60 persons were then taken through professional psychological test to ascertain the depth of their mental alertness, level of creativity, impulse, temperament, preparedness and patience for the jungle life. 15 of them failed to meet with the required standards and were dropped.
Tonight, the 45 applicants will know their fate as another 15 will be asked to go home, while the final 30 contestants will proceed to the jungle.

This year’s version of the reality TV show has been tagged ‘Contest of Champions’. The winner will go home with N7 million, a brand new SUV worth N10 million and N500, 000 wardrobe allowance.
“GUS is a competition for which many of the applicants train several months ahead. They may have toiled to increase the level of endurance to withstand the strain of the physical exercises; they may have practiced their swimming skills to pass that test. But emerging as the Ultimate Hero goes further than physical exercises and ability to flaunt finesse,” Bassey said.

Four Contestants to go this weekend as ...