Did Rihanna fire Jay Z because of Beyonce?

PopDust reports that RiRi had been considering the move for quite a few months, ignited by the fact that RocNation began unofficially sponsoring Jay’s now pregnant wife Beyonce back in April. Apparently, Rihanna feared that she wouldn’t be getting the support she needed (hmmmn!!) or first pick
of the best endorsement deals (O_o) and now that the Nation is expanding, the Barbadian songstress is saying sayanora to Jay-Z.

The official announcement is still pending, but MediaTakeOut, who first reported Rihanna’s exit strategy, says that things will get hairy, given that Ri has a lawsuit pending on her RocNation manager’s sister. While that’s most unrelated (it involves a real estate deal gone awry), it could stir up even more trouble.
But in the meantime see what Rihanna said in her tweet on September 1st 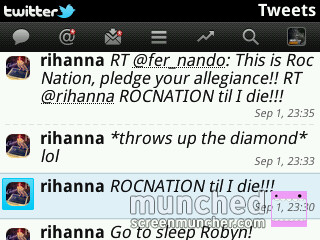 As at Sepetember 1st, Rihanna said in her tweet ‘Roc Nation till I die’. We’ll be on the edge of our seats until the big announcement drops *fingers crossed*
http://feeds.feedburner.com/OloriSupergal