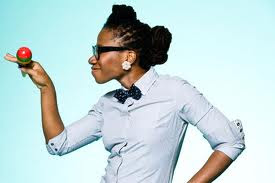 Fresh off a successful European tour in August, international recording artiste Asa berths her sophomore album, Beautiful Imperfection, in the United States of America on September 6. The release is through her French record label, Naive Records. In Beautiful Imperfection, the musician expands upon her emotional repertoire and distinctive musical style, which has its roots in her successful self-titled debut album, Asa released in 2007 – and she continues to charm music lovers across the globe with her unique fusion of reggae, pop, soul, R&B and an unmistakable Nigerian flavour. The album will receive early programming in retail chains including Gap, Victoria’s Secret, Origins, Old Navy, Forever 21, White House Black Market, Torrid, PUMA, Pinkberry, Eileen Fisher, Chiccos, C.O. Bigelow, Buckle, BCBG, and Anthropologie. This is not the first time US fans will be listening to songs from the album as the singer, in June, had performed acoustic shows in New York and Los Angeles to promote the release of Beautiful Imperfection’. The album was rated 2 Most Added at CMJ AAA, and receives strong support from radio stations; KCRW & KPFK; Los Angeles, KGSR; Austin  and KFAI; Minneapolis. The singer continues to win global critical acclaim for her powerful smokey vocals and expressive songwriting: Teen Vogue compares her to “Amy Winehouse at her peak, Bob Marley and Marvin Gaye all in one”. BUST refers to her “smoldering vocals and beautiful and ultra-catchy melodies,” AOL praises the musician’s “swinging hybrid of soul, pop, reggae, and Nigerian music and sincere songwriting and mellow, seductive voice” and

Yahoo! Music observes that “Asa’s smokey voice and velveteen melodies can’t help but evoke a gentle joie de vivre”. In related news, the new video for ‘Why Can’t We‘ which features Asa at a dance party full of ’50s Technicolor rooms, pink balloons and a whole lot of boogying’, is also gathering a fan base all on its own – with music blog, KCRW calling it “a burst of positive energy” and AOL Spinner crowning it “a veritable summer anthem”. “Obviously, we are excited that Asa’s music continues to attract a growing global audience,” said a representative of the singer. “That of course means more and more work, to improve her craft and to continue to produce the best music that she can. For all the love, Asa is grateful as always.” ABOUT ASA Born Bukola Elemide,  was born in Paris, France to Nigerian parents. She was twoyears old when her family returned to live in Nigeria. She grew up in Lagos, in the south-western part of Nigeria. In 2004, she met her manager and friend, Janet, who introduced her into a world that helped her find her bearings and songs in English and Yoruba, music falling somewhere between pop and soul, inspired by her musical heritage – with particular care paid to the melodies – and reflecting the feeling she puts into it. Her texts talk about her country, the things in life, the things in her life, all delivered with feigned naïveté and real irony. It was at this stage of her life that finally returned to Paris. This was her chance to test out her talent on the French musical scene, playing with artists such as the Les Nubians, Manu Dibango, Doctor L and Tony Allen. In the meantime, back in Nigeria, her first single, Eyé Adaba, then Jailer, were beginning to get airtime. MTV chose her as the ambassador for South Africa. soon signed to the ‘Naïve label’. Partnered by Nigerian producer Cobhams Asuquo, and with the new involvement of Christophe Dupouy, she produced her first album, A?ha. Her second album titled Beautiful Imperfection was released on 25 October 2010. The lead single off Beautiful Imperfection is titled “Be My Man” and was released in late September. A video for the song was released in mid-October. Her awards include the 2008 Prix  Constantin and she has toured extensively across the world – including Europe, North America and Asia. Facebook: facebook.com/asaofficial | Twitter: twitter.com/asa_official | Youtube: youtube.com/ASAofficialvideo MySpace: myspace.com/asaofficial | Website: www.asa-official.com | Music:  http://bit.ly/asagetmusic