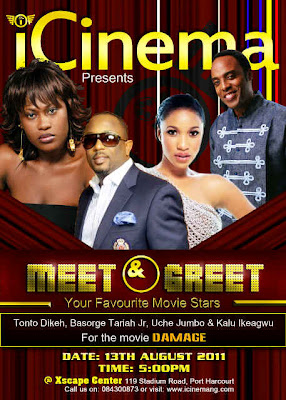 Fans of sultry actress Uche Jombo in Port Harcourt will get a chance to meet and interact with her this weekend as she will be arriving at the XCape centre, 119 Stadium Road, Port Harcourt on August 13, 2011
in company of Tonto Dike, Basorge Tariah Jr and Kalu Ikeagwu for a meet and greet with her fans.
Noticeably, all of these stars visiting PH acted in ‘Damage’, the movie produced by Uche Jombo.
‘Damage’ was premiered in Lagos on the 31st of July 2011 at the Silverbird Galleria amidst a constellation of stars and celebrities. It arrived in cinemas across Nigeria on August 5, 2011 and has since then been getting a lot of patronage from movie lovers across the federation. The movie presents the case of love and domestic violence in such a manner that has never been seen in a movie before. ‘Damage’ is about the story of a man (Kalu Ikeagwu) and his wife (Uche Jombo) who loves
each other immensely, but their way of presenting this love to each other is by engaging in violent fights almost on a daily basis, and this has a serious psychological effect on their children.
On arrival at Port Harcourt, Uche Jombo will definitely have a lot of fans to attend to in terms of signing autographs and answering questions as she has over the years proven herself to be an experienced actress with a talent for flawless interpretation of movie roles and one of those producers bringing about a change in Nollywood via qualitative movies.
http://feeds.feedburner.com/OloriSupergal