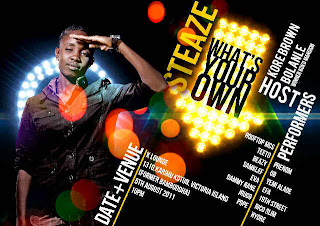 Steaze,with government name Folake Johnson is a young talented female rap artiste from Lagos, Nigeria. She started performing from secondary school which was Queens College, yaba, lagos. She was a member of “Outstanding”, a gospel band which started at Daystar Christian Centre. It later dissolved and that saw the emergence of an all-girl rap group called “Impakt”.She was scouted and recruited during a show at R.C.C.G Acme Parish to join “G-force” before she even gained admission into Unilag but upon  entry,joined “SND” also known as Sounds from a New Dispensation.She went solo with a record deal from Testified Records but it was a deal that never saw life. The inspiration for the stage name was a name given to her by her cousin who said there was always something happening around her. The highlight of her young n emerging career was in her words “realizing every step of the way that a door was always open to me and I just had to
walk through it”. She takes her musical inspirations from Tupac, Timbaland
and Missy. On Friday August 5th , she will be celebrating her birthday and also have a listening party @ X Lounge former Bambuddha 1310, Karimu Kotun, Victoria Island. Time is 10pm … Hosts for the event are Kore Brown and Bolanle koko Mansion.