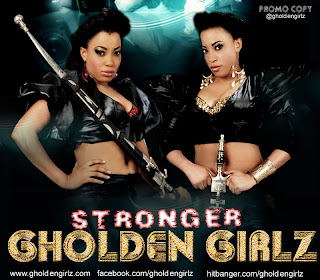 The group GHOLDEN GIRLZ’ started middle of 2010. ‘GHOLDEN GIRLZ’ (GGz for short) are simply referred to as the THE SEXIEST TWIN DIVAS ALIVE, and some others refer to them as the Nigerian ‘BRICK and LACE’ because of the great personality they both possess.

GHOLDEN GIRLZ’ is a music group made up of Tracy and Treasure Daniels, Nigerian stylish twins who are multitalented in the areas of Music, Acting, Modelling, great personality and all that can make a show quite impressive. They started pursuing a career in entertainment during their days in School firstly through Nollywood Movies(Nigerian Movies). On their graduation from the university they intensified their pursuit of a career in music by making two singles ‘OMALICHA’ and ‘JEALOUSY‘ with videos and also relocating to Lagos, which is the nerve center of entertainment in Nigeria.

We searched for a name that will suit the strong brand we intend to build and came up
with the ‘GOLDEN GIRLZ’.
Before launching out they decided to acknowledge the God factor, because they have realized that doing one’s best is just not good enough to be a success. And because they need God’s endorsement for our career hence the letter ‘H’in the spelling, making the group name spell as “GHolden” instead of ‘Golden’.“G H” stands for “God-Holden”; hence “GHolden Girlz”. Make no mistake about the spelling; it’s a big factor.