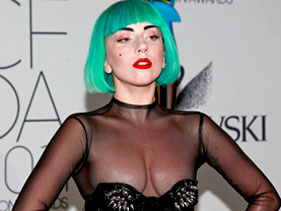 It’s not all love for Gaga, however, Officials in Lebanon have banned Born This Way, describing it as “offensive to Christianity.” The office of general security reportedly impounded copies of the chart-topping album when it arrived at the airport in Beirut. “Distributors are prohibited from circulating media that diverges from public decency and morality or is at odds with nationalistic or religious beliefs,” officials told The Guardian.