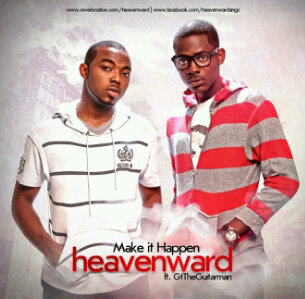 Heavenward is a group of two young prodigies Kosoko Adekunle (@adekunleGOLD) and Bakare Michael (@MSBeats),the group started from the church where kunle and michael were choristers. Heavenward‘s early sound was indebted to Hymnal kind of songs but eventually grew to many genres of popular music. Throughout the group’s musical pursuits, they have maintained a recognizable sound built on melodic instrumentals,Their lyrics, often embellished with spiritual imagery, focus on personal themes and sociopolitical concerns

Heavenward, a decade and a year old group formed at C A C oke-itura when the members were very young with limited musical proficiency. Within seven years, they released their first single titled “HelplessCry” and “my Home” was released much later… the group has performed at different concerts, shows and all. Heavenward does Christian Contemporary /folks /R n B/ SoftRock, the group at every time takes STRONG/DEEP lyrics into consideration when writing their songs.  The Song “make It happen” that features Gt The Guitarman is the 7th the group has released…

Watchout for Heavenward as they Make things happen