CHARLY BOY AND OPE BANWO SIGNS DEAL TO DO A MOVIE 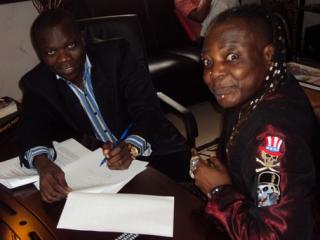 Ope Banwo plans an epic Trilogy to dramatize the Life, Struggles, Controversies and triumphs of the Charly Boy Oputa Fresh from making a major statement with GHETTO DREAMZ, the first biopic on a Nigerian musician and basking in the glow of his Los Angeles Movie Awards for the script he wrote for the GHETTO DREAMZ movie, Ope Banwo, the innovative CEO of wave-making Stingomania Entertainment, is set to raise the stakes in his fast rising profile as the King of Biopics with an ambitious movie on Charly Boy, the Area Fada.The latest news from the innovative barrister and entertainment mogul is that he has sealed the contract with Charles Oputa to produce an epic biopic about the life and career of the controversial, and sometimes weird musician, Charly Boy, who is affectionately recognized by the masses as the Area Fada.Though rumors of negotiations for the Charly Boy  movie has been making the gossip circles since the Dagrin movie, Ghetto Dreamz,  took the entertainment world by storm, we can now confirm authoritatively that Ope Banwo has indeed signed the contract with Charly Boy on his last trip to Abuja in May.. 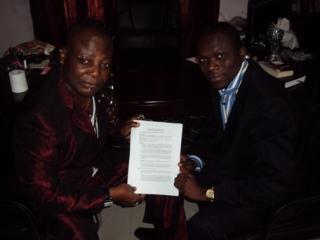 While the details of the agreement is still shrouded in secrecy, it has been revealed that Ope Banwo has been giving the permission to research the life of Charly Boy and turn that research into an all encompassing, no-holds-barred movie, on Charly Boy’s struggles, his mistakes, his triumphs as well as his colorful lifestyle and fights on behalf of the masses.When contacted on the phone, Ope Banwo confirmed that indeed a contract has been signed to produce the Charly Boy movie and from all indications, this movie is going to be an epic one that will take the biopic genre of movies to the next level in Nigeria. According to Ope Banwo “I am highly excited and somewhat humbled to be in a position to make a movie about a living legend and icon of anti-establishment figure like Charly Boy. I am drawn to do a movie on Charly Boy because his story has all the ingredients of a mega blockbuster, while at the same time we get an opportunity to celebrate the life of an uncompromising figure who has managed to force his brand on the consciousness of Nigerians against all odds.”Ope Banwo continued,

“Charly Boy was born with a silver spoon in his mouth but he threw it away to go and find his own way in the gutter, and somehow against all odds, he came back home with a golden spoon. You have to love that”.  According to Ope Banwo, “How good can it really get? I mean, a man people used to laugh at for being the wayward son of a Supreme Court judge, has somehow turned the tables where his father is now the one being introduced as Charly Boy’s father in high society circles” Ope Banwo, an attorney with offices in Lagos and USA, is fast making a claim to being the King of Biopics since he has been responsible for all the biopics that have been produced in Nigeria to date. As CEO of Dove Media, he conceived and hired Charles Novia to produce the movie, COVENANT CHURCH based on the origins of the Redeemed Christian Church of God. More recently he produced the award winning GHETTO DREAMZ on the life of the late popular rap artiste, Dagrin. Other biopics currently being researched by Ope Banwo include a political biopic on governor Bola Tinubu titled “ASIWAJU” and a musical drama on Onyeka Onwenu tentatively title “AMAZON”

On the Charly Boy movie, Ope Banwo has explained that due to the highly complex, entertaining and redemptive story of Charly boy, “we are considering shooting the movie as a Trilogy, a story with 3 complete parts that will cover 3 distinct evolutionary aspect of the phenomenon known as Charly Boy. From our research so far, we have observed that Charly boy seemed to have lived 3 different complete lifestyles that in themselves are complete stories with all the entertainment value a movie can handle.While this is not cast in stone since we are still doing research, we believe that we can only do justice to the epic story of Charly Boy in 3 different complete movies that are tied together as an epic trilogy”. Final decisions on the format of the production will be determined when the research and script is finally completed. Already, we have assembled over 800 pages of research materials on Charly of and we have not even talked to some of the other key people in his life”.