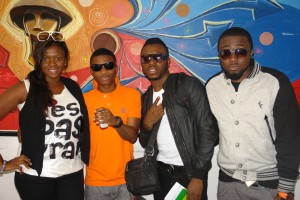 Sources inform that this year’s Hip Hop awards would take place in September. The Venue and host would be announced soon. ELDee the don produced theme song featuring Kel, M.I. and Banky W would go for a new one produced by Samklef and performed by Wizkid, Waje and Ice Prince.
Samklef is said to have submitted two beats for the theme song, and one has been picked by the awards coordinator.
In other news, HipOnTV has been launched on HiTV yesterday