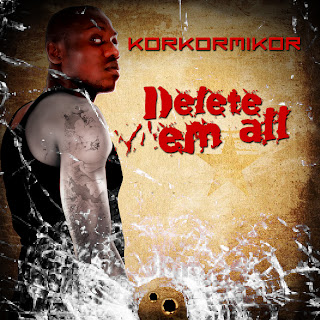 Korkormikor comes from the same part of Nigeria that churned out
mainstream acts like Timaya, Frank D’Nero and Duncan Mighty.  He was
born Deinbofa Nana Okoto in Otuan, a typical resource-rich but
economically deprived community in Bayelsa State, Nigeria. He is a
singer-songwriter, and Hip-Hop impresario, and is arguably the next
big thing from out of the Niger Delta area of Nigeria.

Korkormikor’s story of hardship was froth with more lows than highs
until he met Larte ‘The Tycoon’ Badom, the CEO of Xcel Music (now
Molach Entertainment). Soon after, in 2007, he released “Something for
Y’all”. The song which was the lead single on his debut album:
“Korkormystic: Port-Harcourt City Breed”, went to become a
groundbreaking single in the region.

His song, Delete Them All, captures the angst he has built up over the
years. With the mellow mood of the song, it’s easy to overlook the
serious quips made on the track. All in all, he calls for a ‘hit’ on
the heads of proverbial haters/enemies-of-progress.

Korkormikor’s music is inspired by his personal battles as well as the
communal struggles of his people. His musical influences range from
Reggae to Hip-Hop; and include: Alpha Blondie, Bob Marley, Majek
Fashek, Lauryn Hill, Tupac and Snoop Dogg.