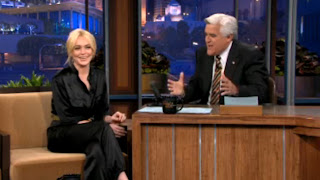 LINDSAY Lohan has told Jay Leno she hopes to earn an Academy Award by age 30 to overshadow her tumultuous private life.

“I’ve made a lot of poor decisions in the past and I’m dealing with the consequences of those decisions… I’m not a kid anymore, I’m 24,” she said on The Tonight Show with Jay Leno in an interview that aired Tuesday in the US.
.
When Leno asked the troubled star where she hoped to be in six years – at age 30 – she heartily responded, “hopefully sitting here after I’ve won an Oscar, that would be ideal. Work, work work.”