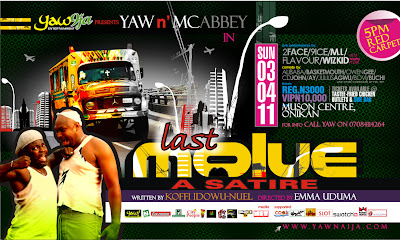 On-air personality at 95.1 Wazobia Fm, Steve Onu popularly known as Yaw, is back with the third season of his annual theatre project. This year’s project titled ‘LAST MOLUE’ was written by the creative stand-up comic Koffi and produced by Emma Uduma.

‘LAST MOLUE’, which will feature Yaw and the talented stand-up act MC Abbey, is a two-man cast satire reflecting on what is going on in the country; politically, religiously and economically with lots of comedy.

The show will be held on Sunday, April 3, 2011 . The host will be on air personality  EJIKE cool fm and performances from comedy Godfather ALIBABA , JULIUS AGWU , CD JOHN , Singer 2face, hit-maker 9ice,  rappers’ rapper M.I  and rising singer FLAVOUR plus other comedians at the MUSON Centre, Onikan, Lagos.