TERRY G GIVES BACK TO THE SOCIETY AS HE CELEBRATED HIS BIRTHDAY. 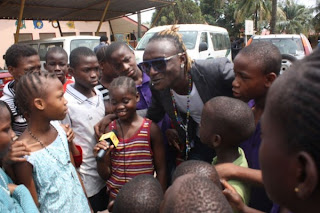 Terry G with some of the children

The musician who celebrated his birthday on the 17th of March in a remarkable way by visiting the children in the orphanage home SOS Children’s Village in Lagos with his friends including Big Brother Africa’s Uti Nwachukwu to share his special day with the children.

As he was given a tour around the children’s village including the hostels and the classrooms, the children excitedly rallied around the music star. Some even sang songs from his previous albums and Terry G obliged them by singing along. Other than his presence, the musician also brought gifts and provisions for the children.