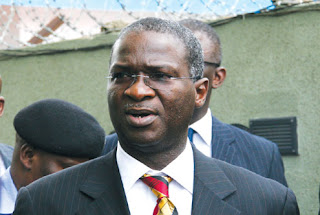 Governor Babatunde Fashola of Lagos State, yesterday, announced a new salary package for the state civil servants.
This was disclosed by the Commissioner for Establishment, Training and Pensions, Mr. Jide Sanwo-Olu, who was flanked by the state Head of Service, Prince Adesegun Ogunlewe and the Special Assistant to the governor on media, Mr. Akeem Bello at a press briefing at the Bagualda Kaltho Press Centre, Alausa, Ikeja.
Sanwo-Olu said: “The decision to increase the Lagos State civil servant salary was arrived at the special Executive Council’s meeting completed some minutes past 7p.m.

He did not reveal the details of the new structure but promised to announce the details next week.
According to him, “the civil servants affected include teaching and non-teaching staff, core civil service profession, medical , dental and other health workers in the state.”

He added that all necessary recommendations had been taken care of in the new salary structure.
Sanwoo-olu emphasised: “The new package will take effect as agreed upon with all the various unions from the first of January 2011. What this means is that in tandem with the 2011 budget approval. We will also be doing a one month arrears of this package.”