Toke Makinwa’s estranged husband, Maje Ayida has hired British lawyers to sue Toke Makinwa over her tell all book ‘On Becoming’ which he says is an “exaggerated fabrication”. 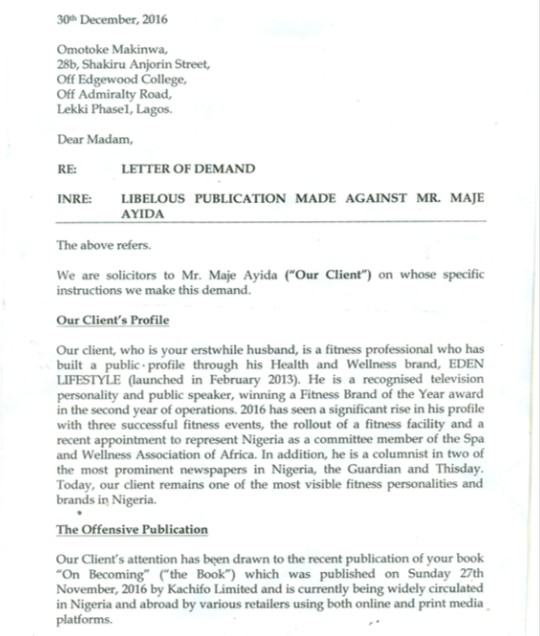 He has also asked her to stop the sales of the book and all forms of promotional activities.

The request was made of Makinwa by Maje Ayida, who’s lawyers have also sent the on-air-personality, a “letter of demand.”

Makinwa’s book, On Becoming, had detailed her account of her relationship/marriage to Ayida, a fitness expert.

In the book, the television personality accused Ayida of giving her sexually transmitted diseases, being a serial cheat and committing adultery.

The legal documents describe the book as nothing but “exaggerated fabrication”.

The book which was published November 27, 2016, by Kachifo Limited, was said to contain “defamatory words”.

They are Carter-Ruck, a leading defamation law firm in the UK to top figures like Simon Cowell, Elton John and Chelsea FC while Kemi Pinheiro (SAN) of Pineiro LP is heading the legal front in Nigeria.

“I Want To Redefine Film”, Says Kemi Adetiba Director Of The Moment, As She Covers Today’s Woman’s January/February Issue