What an interesting movie! I was drawn in by the hype like pretty much everyone else and was desperately curious to know if there was a substance to it. 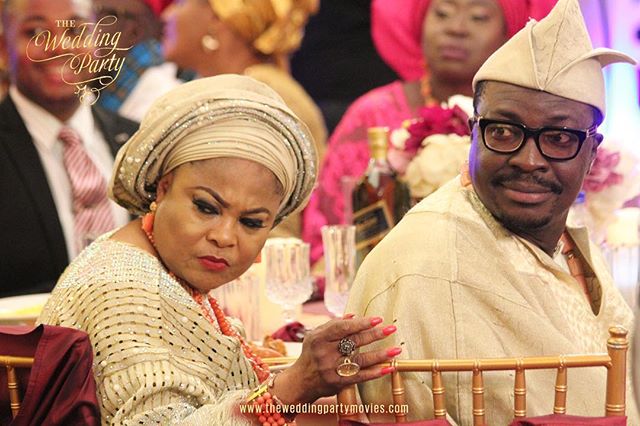 Now, everyone knows Mo Abudu is the queen of hype so whenever there’s an Ebony Life production release, all of Nigerian media is agog with it for weeks. But when everyday people, that have absolutely nothing at stake, are giving great feedback on a product, you know it’s time to check it out yourself. So I did! And this is my feedback.

This was what happened when we got to the cinema to get our tickets. Watch the video;

Let me give you a bit of background information first:

The Wedding Party is a 2016 Nigerian romantic comedy/drama film, directed by Kemi Adetiba.  It first premiered at the Toronto International Film Festival (TIFF) on the 8th of September and later in Eko Hotel, Lagos on the 26th of November. It opened for public viewing in Nigerian cinemas on December 16 and is currently still showing.

WATCH THE TRAILER HERE IN CASE YOU MISSED IT.

Adesua Etomi as Dunni Coker – A beautifully decent young woman is getting married into a very wealthy family. Her groom, Dozie Onwuka, (played by singer Bankole Wellington) is a risky choice for the following reasons:

Dunni is a special girl in the Coker family. Her mother, Tinuade (Sola Sobowale), goes to great length to hide her disdain for Obianuju (Ireti Doyle) just so her daughter can have a beautiful wedding ceremony. It’s an inter-ethnic wedding between the Onwukas – who are Igbos, and the Cokers – who are Yorubas.

Fred Onwuka (Richard Mofe Damijo) and Bamidele Coker (Comedian Alibaba) are cordial. The fathers understand the enmity between their wives and do all that they can to manage their wives so that their children’s day isn’t ruined.

Rosie  is an interesting character played by Beverly Naya. She appears to have shared bed with Fred and Dozie and is intent upon keeping Dozie from this marriage to Dunni. She recruits a few other bitter losers to execute her cards perfectly at the high society wedding.

WHAT YOU MISSED –  PHOTOS FROM THE LAUNCH OF THE WEDDING PARTY IN LAGOS.

Everything oozed money and class. It was so relatable, so Nigerian. From the aso-ebi, to the guests; the colours, the ambience, bridesmaids, wedding planner, band and the Master of Ceremony – every single element was Nigerian. This movie is produced by Nigerians for Nigerians.

The scenes and wahala felt so familiar to the ones I have seen or experienced at one Nigerian wedding party or another. There’s a mix of cultures, local and international cuisine, show-off and stare-downs as the two families battled to out-do each other and carry the day. And  what about the souvenir rush that escalated into a free-for-all? It was all so typical of a Nigerian wedding reception. The wedding party reception scene is exactly what you’ll experience in any big budget Nigerian party.

The producers have delivered what Nigerians really want; and in a huge way. The casts were carefully selected and everyone who played a part did it well. I have known Sola Sobowale for years, from watching Yoruba films where she always plays an excitable character. She brought her magic and, in my estimation, made this movie the hit it is. Sola was the typical bride’s mother.

The big lesson for all, found at the end of the movie, is that a united family can handle whatever obstacle that comes their way. This is exactly what was portrayed in this movie and I like it.

We need more movies like this in the cinema. Movies we can pay our hard-earned Naira to watch over and over again.  that we can pay our hard earned for to watch.  Well done to Kemi Adetiba, Mo Abudu and all the cast, crew and sponsors of this movie. It was entirely well produced. This movie is worth the hype.