Coming three weeks after the death of phenomenal boxer and philanthropist, Muhammad Ali, Timaya paid tribute to the Olympian at Legend’s Real Deal Experience in Abakaliki.

The self-proclaimed Egberi Papa 1 of Bayelsa donned a shirt with an illustration showing the late legend on the cover of New York Times. 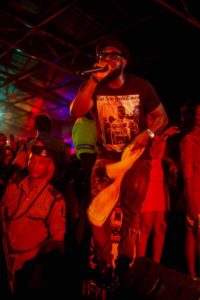 The Real Deal Experience will be visiting other major cities in Nigeria in the coming weeks as it has already made stops in Lagos, Onitsha, Port Harcourt, Ibadan, and Umuahia.