Cossy: I’m 31, Partying made me look this Old

I know what comes to your mind when ever you hear the name ‘Cossy Orjiakor’ and I forgive you; we all know Cossy as one who is never shy to parade her melons. However, sorry to disappoint you, this post isn’t about her melons.

The actress is presently on set working on a movie directed by Zeb Ejiro.

The Nollywood actress took to Instagram on Thursday, June 16, to share a photo of herself along with some of her colleagues on the set of the movie being shot in FESTAC, Lagos.

Cossy shared a rarely seen photo of herself where she was dressed in a long sleeved shirt, and without makeup. Yes, her boobs were completely covered up!

Although she rocked the no makeup look for the shoot, Cossy was honest enough to take the words out of our mouth by explaining her look.

Cossy Orjiakor and colleagues on set of the movie

The actress who turned 31 in October last year, shared the photo and captioned:

“Rounded up.. The REFORMER.. Working for Mr Zeb Ejiro and having Mr Keppy and Ms Bukky help me out with my expressions have opened up more acting opportunity now am shooting back to back…. Haha shooting right now in festac… My face thou… Evidence of partying all night without sleep….. Age me so fast.. It’s like a mirror.. Whatever I feel inside shows outside.”

It will be recalled that Cossy Orjiakor recently received  an International Award for ‘Distinctive DARING Artist‘ by a Europe based group and she shared a Picture and the caption: 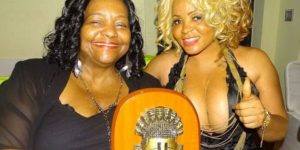 Cossy had earlier in the year released photos where she was seen raising her top and clenching to her breasts.

In one photo, she captioned:

“Hmmmmmm. Forgive me though… I have been drinking… Drinking a lot on set of Uju Edochies movie… Anyway am soo… Had to take this pix to ease the pressure am getting down“

Yes, I know this is the Cossy you are used to……and I said this post isnt about her breasts…..hmmmm
Tags: ageingCossyCossy Ojiakorpartying
ShareTweetSend
Previous Post

I’m sorry for everything; Olamide apologizes to Headies