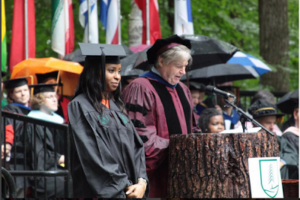 Vice President Yemi Osibanjo became a proud father, today one of his daughters graduates with a masters degree in USA.

The vice presidents wife took to instagram to express her joyful and grateful heart for her daughters success. Here was what she wrote on the social networking platform;

We can say shes taking over the steps of her father. Her father the Vice President of Nigeria Yemi Osibanjo was also a brainbox. After his primary education at Corona in Lagos between 1965-1975, He attended Igbobi College Yaba Lagos between 1975-1978, He bagged a degree in Law at the University of Lagos Nigeria and was awarded LLB Law Degree, He attended Nigerian Law School in 1979-1981. In 1981 he was awarded a Masters degree in law after attending the London School Of Economics.

From 2007 to 2013 Osinbajo was once again employed as a Professor of Law, Department of Public Law, Faculty of Law, University of Lagos. In 2007, Osinbanjo was made Senior Partner, Simmons Cooper Partners (Barristers and Solicitors), Nigeria. Osinbajo was also a senior lecturer at the Lagos State University.

And the list goes on and on in proving that Brilliancy and Smartness truly runs in the blood of the Osibanjo’s.