A Hermès Birkin handbag, described as the “rarest, most sought-after, most valuable” of its kind, by Christie’s auction house broke records at a May 30 auction at its Hong Kong location.

The matte white Himalaya Niloticus Crocodile Diamond Birkin was sold for $300,108 which now makes it the most expensive handbag to sell at auction, topping last year’s sale of a $220,000 bright pink crocodile skin handbag by Hermès, which also sold at Christie’s in Hong Kong. 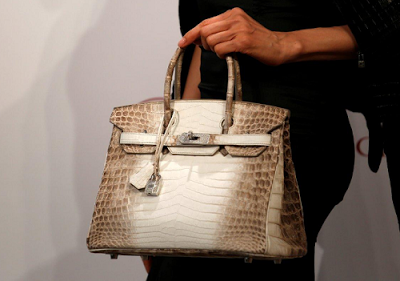 In a 2014 interview, 1st dibs dealer Jane Finds told Vogue that the 18-karat white gold hardware and 8.2 carats’ worth of diamonds aren’t the only rarities.
She said:

“This bag is made of Nilo crocodile, rendered in a subtle coloration that is meant to evoke images of the majestic Himalayan mountains. This dyeing process is painstaking and takes many hours to complete—the lighter the hue, the more difficult the process.”

PETA has since taken issues with the company for using crocodiles to manufacture their bags.

The world’s most expensive purse, however, is still Mouawad’s 1001 Nights Diamond Purse, which is valued at $3.8 million, and has more than 4,500 diamonds.