– “My Son’s company, MIC Is Not The Same As LTJ’ –Late Tunji Okusanya’s Mum

It is now 2 years and 6 months since late Tunji Badejo Okusanya, founder of Nigeria’s biggest funeral services company, MIC died in the Associated Airline plane crash in Lagos. Okusanya died in the crash along with his son, Tunji (Jnr) in the ill-fated chartered flight en-route Akure for the burial of late former Ondo Governor, Olusegun Agagu. Now in death, it remains to be imagined if the late MIC boss, who was loved by many during his lifetime would be happy, if the latest development in the family is anything to go by. We gathered that there has been a big split in the family for over one year now, the peak of which was the setting up of LTJ Funerals (which does same business as MIC) by the first child of late Okusanya, Bolanle. 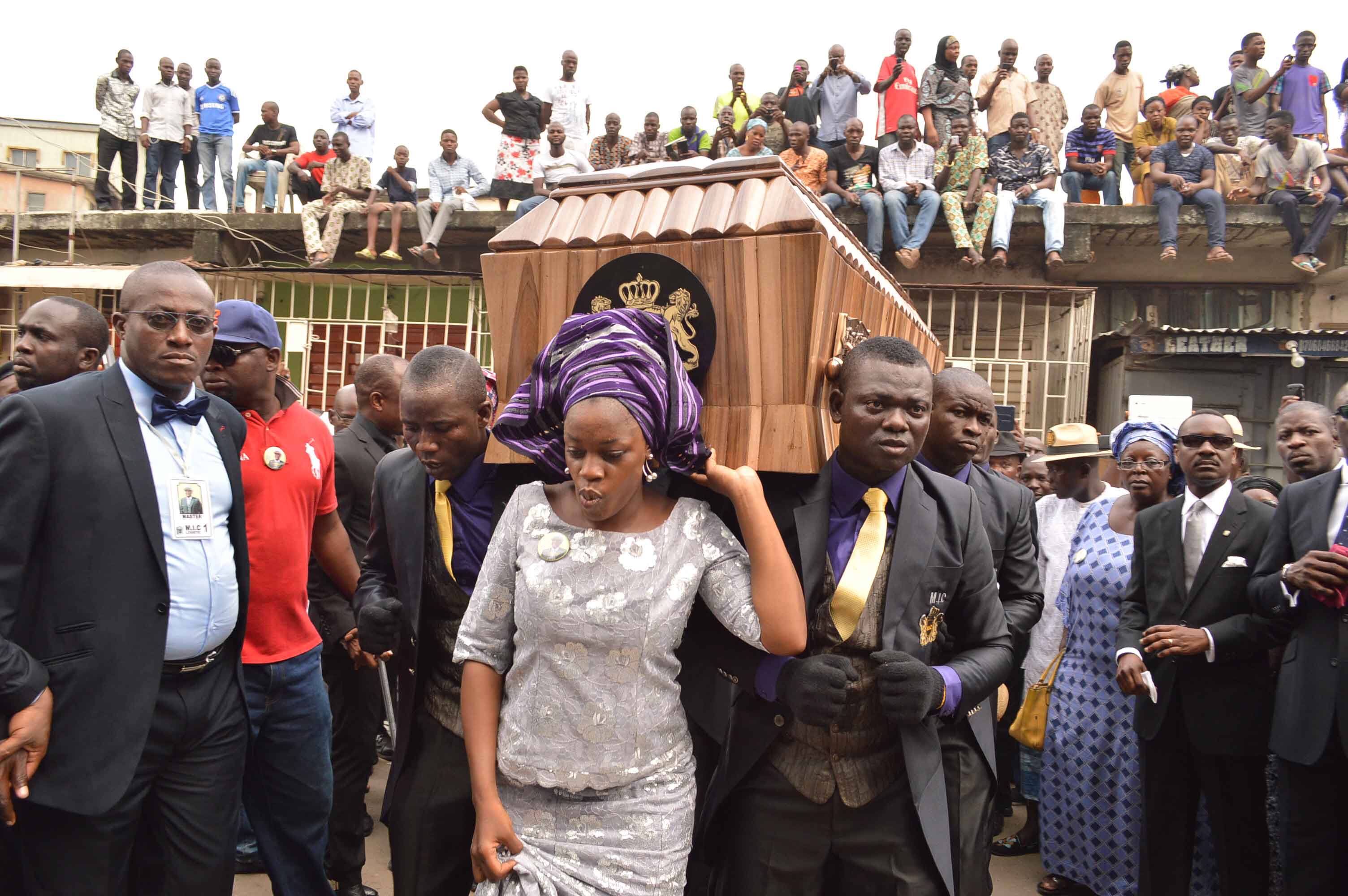 Bolanle Badejo-Okusanya shocked not a few when she set up LTJ Funeral Services last June. This was more so because prior to this, she was in charge of running her late father’s MIC. Her decision to quit MIC, we learnt followed a disagreement with members of her family (including the elders) and most of her siblings. We have full details of what transpired.

Late Okusanya’s first son, Olatunji Okusanya (Jnr.) was already taking after his father in the profession too before the unexpected happened on October 3, 2013 and he died with his dad in the air crash in the course of performing what they know how to do best. Mrs. Bolanle Okusanya-Feyita, the first child of late Tunji Okusanya, who is married with 2 kids and was based in London relocated to Nigeria and took over her father’s the business. But Bolanle was just in MIC for six months before she disappeared and many were wondering what was happening to the thriving business. She returned again, but this time with a new company, LTJ. 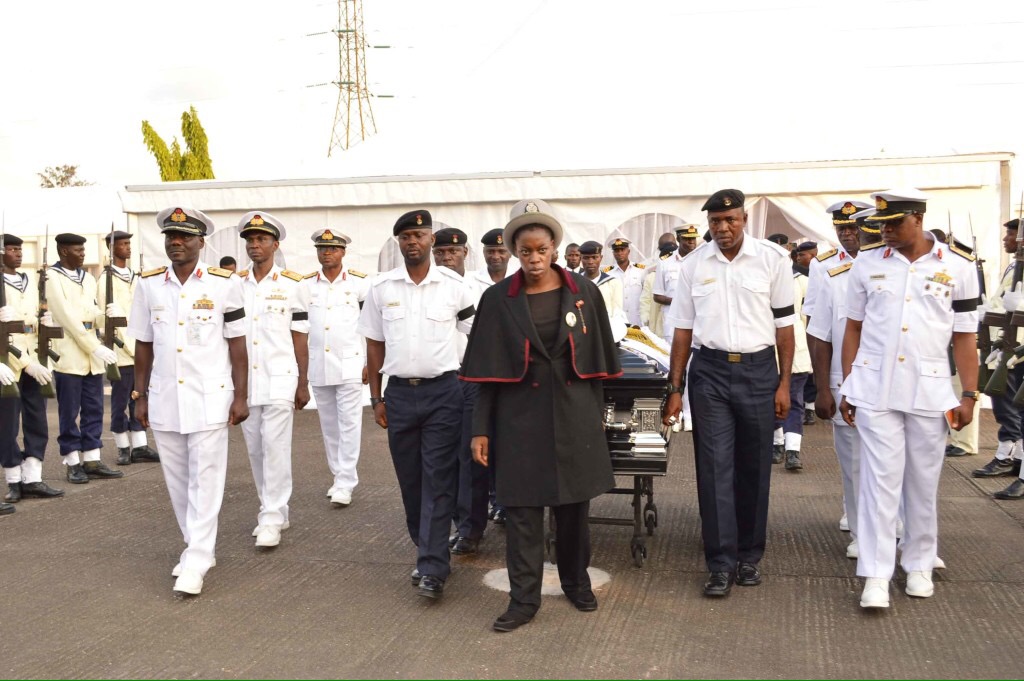 After the launch of the new company, Bolanle granted some press interviews, in one of which she said that LTJ is in the same line of business with MIC, but with different approach. She said LTJ, which was officially opened on Wednesday, June 3, 2015, is set up in memory of her father and brother.

But what made Bolanle make that huge move? Our source revealed that immediately after the late Okusanya and his son died, his widow went into the traditional mourning process, which normally lasts months. The widow, who is the legally married wife of late Okusanya was the General Manager of MIC even before his death. Bolanle’s mum was the late Okusanya’s first wife, but they have divorced for more than 20 years. So, it was when Okusanya’s widow was in mourning that Bolanle took charge of the running of MIC.

When the widow, Adebola came out of the traditional mourning exercise, and she was ready to come back to her post at MIC, Bolanle was not prepared to run the company with her stepmom. The family, including the late MIC boss’ mum then waded in and called meetings to resolve the imbroglio. The position of the family was that the MIC Legacy should be protected and that everyone should be involved in sustaining the business. The late Okusanya’s widow, as agreed at the meetings should be the chairman of MIC, while Bolanle should be the MD. This however, didn’t bolt down well with Bolanle, who we gathered told his grand mum and other elders at the meetings that she would get back to them soon after she might have consulted her mum and some other people. Meanwhile, she never did. She cut herself from communication with the family and later returned to set up her own company.
This development, our sources informed didn’t go down well with a lot of members of the family. According to our source, while he was alive, the late Okusanya ran MIC like a family business. In fact, he engaged many of his nieces and nephews, as well as other extended family members into MIC and they are all doing well.

The development later degenerated into a deeper family rancour when it was becoming obvious that Bolanle’s LTJ would do the family’s legacy, MIC more harm than good. We learnt that at a point, clients began to get confused about the 2 companies, as they have difficulties differentiating between them. Also, most of the places where MIC go to bid for jobs, LTJ is always also among the competitors who also drag jobs with it. This irks the Okusanya family members so much, as they see what Bolanle did as an affront to the family elders.

Today, a good number of the late MIC family members are not happy with Bolanle, who has also cut herself from the family. Our source also hinted that the family is not disposed to the report that Bolanle at some points has been telling clients that MIC and LTJ funeral services are the same. Right now, the late Okusanya’s widow is in charge of the running of the company, alongside some of the family members who worked with the late MIC boss when he was alive; including his immediate younger brother. However, we gather that the company has been doing well.
When she set up LTJ, Bolanle poached one or two key workers at MIC, we learnt.

When our reporter visited MIC’s office in Lagos Island few days back, no one there was willing to talk about the development. We were however able to get across to the mother of the late Tunji Okusanya, 94yr old Mrs Juliana Olayemi Okusanya. The nonagenarian was reluctant to talk to the media about the affairs of her family. She however agreed to talk about her late son. In the course of the interview, she confirmed the story that Bolanle went ahead to set up LTJ against the will of the family.

Asked how she felt about her granddaughter’s decision to go against the family’s will, she said “there is no problem within the family. Although, the family wished she had stayed back to join in the running of her late dad’s business and ensure that the legacy do not die. But since she has decided to set up her personal outfit, I don’t have anything against that. In fact, I am happy for her. It is a good thing that she also has her own.”

When she was asked about whether LTJ will run MIC out of business or not, Mama was quick to respond; “no, MIC remains the big brand it has been. It is not the same thing with LTJ. Since my son died, I have been receiving good reports of how the legacy he left behind has been doing well. MIC is the brand my son built for many years, and the legacy remains, because capable hands have been running it.”

On whether she feels happy that her granddaughter disobeyed her counsel, she said “Well, I can’t be happy when I and some elders of the family told my granddaughter to stay and carry on with her father’s company and she refused. Although, as a mother, there is a certain level you cannot take your anger to. It is true that family members met and persuaded her to stay with MIC, but she declined. I wasn’t at the first 2 meetings, but I attended the last one, where the decision was taken. One of the uncles of Bolanle’s late father, who is his 90s, was there on that day. My son’s widow was also present. We agreed that since the widow, who is Bolanle’s stepmom had been running the affairs of the company, and that she should continue in that capacity, while Bolanle take the executive role. She was not ready to work with his late dad’s widow. After enough persuasions, she told us that she would go to consult her mum’s family and get back. Weeks after the meeting, I called my granddaughter severally on her phone lines in London where she was staying, but she never picked until I got angry and never bothered to call again. The next thing I heard was that she has relocated fully from London to set up her own funeral services company. She didn’t tell me about her decision, but yet what can I do? Would I have said she is no more my granddaughter; the very first one? And she was in charge of MIC for some months when the widow was observing her traditional mourning rites. It was after the meeting that she left the country and later returned to set up her own.”

When we contacted Bolanle Badejo Okusanya to respond to the stories making the rounds, she declined to comment. She did not respond to the text message sent to her and when we eventually got to talk to her phone, she gave us a simple answer; “I really don’t have anything to say about this.”