High-level political machinations have commenced underground at the Nigerian Senate over who may eventually succeed Senator Bukola Saraki as the Senate President, as his trial over allegation of false assets declaration begins at the Code of Conduct Tribunal (CCT).
Daily Trust on Sunday digs into the unfolding battle for the coveted Number Three seat.

The move according to the newspaper received a boost last week when the tribunal dismissed Saraki’s application, asking it to drop the charges, citing procedural errors. Soon after the verdict clearing the course for the trial, senators with interest in the Senate Presidency began strategizing on how to take over from Saraki, holding surreptitious meetings where they canvassed for the support of their colleagues.

Recently, there have been series of secret meetings by all camps at the Upper Chamber with the sole aim of producing a united front ahead of an expected post-Saraki era.

It was learnt that the APC caucus, which was facing sharp division, started its meeting with truce talks spearheaded by the former Governor of Sokoto, Senator Aliyu Wamakko.

The meeting, which started in the office of Senator Abu Ibrahim (APC Katsina South), succeeded in bringing key actors in the warring camps of the APC together.

It was gathered that the APC senators were forced to cement their crack following the moves by the PDP senators to snatch the Senate Presidency seat from the APC.

It was further learnt that the PDP caucus has been holding marathon secret meetings on how to take over the Senate Presidency, with the final strategy meeting held outside the National Assembly on Wednesday, which had the party’s national chairman, Senator Ali Modu Sheriff in attendance.

Making public, for the first time, the agenda of the meetings, Senator Nwaboshi said they had perfected plans to produce the next Senate President if Saraki was forced out of the seat.

An analysis of the strength of the party at the Senate shows that the APC has 58 senators, PDP 44 and LP one in the person of Senator Ovie Omo-Agege of Delta Central. Six seats are still vacant in the Red Chamber, as the reruns for six senatorial districts are yet to be conducted. At the inception of the Eighth Senate in June last year, APC had 59 and PDP 49, while one seat was vacant.

It was widely believed that the PDP members are planning to relaunch the party, which was defeated at the 2015 general elections, with the Senate Presidency. 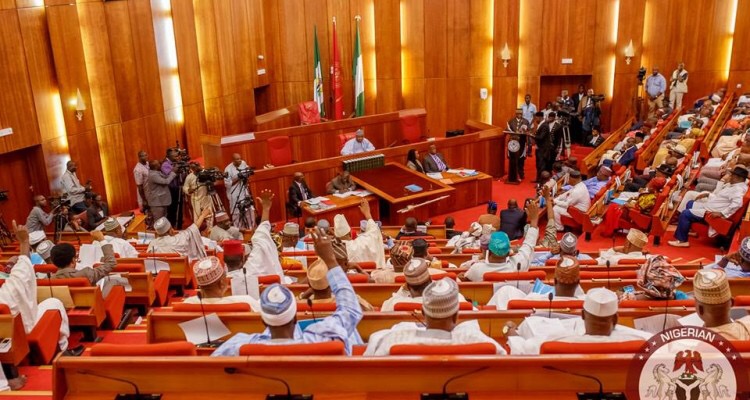 High ranking senators confided in Daily Trust on Sunday that five names are being touted by various camps in the Red Chamber as the likely successor of Saraki.

Impeccable sources in the Like Minds camp supporting Saraki told our correspondent that they were weighing the option of Senator Abdullahi Adamu (APC, Nasarawa West) as Saraki’s likely successor.

Senator Adamu was a two-term governor of Nasarawa State, from 1999 to 2007, on the platform of the PDP. He decamped to the APC in 2014 and is the chairman, Senate Committee on Agriculture.

According to sources in the Like Minds group, the former governor was being considered for the job in order to retain the position in the North-Central geopolitical zone, where the current Senate president comes from.

Another APC senator that the group is considering for the job is Senator Mohammed Shaaba Lafiagi, representing Kwara North Senatorial District. Lafiagi’s name made the list because in addition to coming from the North-Central zone, he hails from the same Kwara State as Saraki and was said to be a beneficiary of the Saraki political dynasty in Kwara.

A prominent member of the Saraki’ camp told our correspondent that meetings were secretly being held at the residence of a former governor in Abuja.

“If I’m to be in Saraki’s shoes, I will resign and concentrate on my trial, but since he has not, we don’t want to be caught off guard, hence we are looking another way round,” he said.

The senator, who said the candidature of Adamu was being promoted by some former governors who are influential in the Senate, added that senators in another faction in the same Saraki camp were pushing for Lafiagi, with a view of retaining the position in Kwara State.

Senator Ahmed Ibrahim Lawan (APC, Yobe North) who has been at the National Assembly since 1999 was the preferred candidate of the APC for the Senate plum job last year, but Saraki in alliance with PDP senators pushed him aside.

Members of the Lawan camp are relying heavily on the backing and support of the Presidency and that of the leadership of their party, especially the national leader, Senator Bola Ahmed Tinubu.

It was gathered that Saraki deferred the plan to suspend Senator Marafa from the Upper Chamber, following ‘warnings from the powers that be.’ The return of Senator George Akume (APC, Benue-Northwest) from a medical trip that lasted weeks has boosted the chances of the Lawan camp.

“The presidency is still with us because of the stance of President Muhammadu Buhari on the issue. Whether they like it or not, one day they will fall. We are watching as the trial progresses,” a senator in the camp said.

Another senator whose name is ringing bell in the Upper Chamber as a likely successor for Saraki is the Senate Leader, Ali Ndume (APC, Borno South).

When the Senate was inaugurated in last June, Ndume contested for the deputy senate President seat, but he was defeated by Senator Ike Ekweremadu, on the strength of PDP alliance with Saraki.

Sources told our correspondent that the continued re-echoing of Ndume’s name as a contender for the seat has upset the loyalists of Saraki who are seeing him as one of their own. Ndume, a second time senator, stepped up from the House of Representatives to the Upper Chamber in 2011.

Sources close to him said the Borno-born senator has his eyes set on the Senate Presidency.

The chances of the duo of Lawan and Ndume are being hindered by the Speaker of the House of Representatives, Yakubu Dogara, who happened to be from Bauchi State in the North-East, the same geopolitical zone as the two.

It was gathered that the Deputy Senate President, Ike Ekweremadu, is said to be in the race.

Ekweremadu is favoured by the ranking rules of the Senate. He has been at the Upper Chamber since 2003 and Deputy Senate President since 2007.

It was widely believed that Saraki rewarded the PDP with the Deputy Senate President seat following his alliance with them in June last year.

Observers are of the view that the PDP is trying to repeat the Aminu Tambuwal’s episode of the House of Representatives that dealt a deadly blow to the party.

The return of the immediate past Senate President, Senator David Mark (PDP, Benue South) to the Red Chamber has brightened the chances of the PDP to clinch the post should it slip off Saraki’s hand.

Contrary to reports, our correspondent gathered that Mark is not interested in staging a comeback.

Two APC senators from the North told our correspondent that they were trying to unite to deflate the plans of the PDP senators.

“We are fully aware of the plot of the PDP to take over the seat in case Saraki falls, but we are working to block them. We know their game plan and this is why we are trying to close our ranks for the benefit of our party and Nigerians in general who voted them out and brought us in,” an APC senator, who spoke on condition of anonymity, said.

Between Wizkid & Linda Ikeji: Why they don’t see eye-to-eye